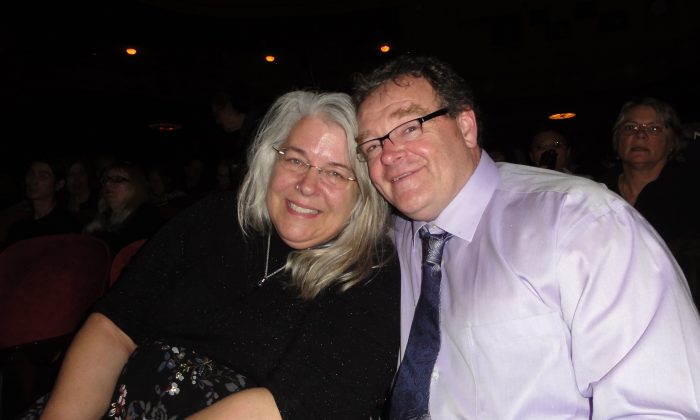 BOSTON—As the curtain lifted and light filled the theater, artist Kim Whitney’s eyes became transfixed on the shades of pinks, greens, and blues that were meticulously arranged on a painting-like animated backdrop. Whitney felt her heart beat a little faster as she admired the unique color combinations before her. Then suddenly, ladies in flowing dresses glided from the screen and came alive on stage—something that she did not expect.

“It’s beautifully done,” Whitney said. “Combining the technology with the actual program, it takes it to a different level.”

Whitney and her friend experienced Shen Yun Performing Arts on Jan. 24, at the Boch Center. Shen Yun is a premier classical dance and music company that travels the globe with a mission to revive China’s divinely inspired culture that was lost after six decades of communist rule. The New York-based company is currently touring across five continents and set to perform in over 100 cities.

Shen Yun’s digital backdrops extend the stage and transport audience members to palace grounds, vast grasslands, and other faraway mystery kingdoms. These landscapes are inspired by China’s 5,000-year-old history and reflect the nation’s multifaceted geography, society, regions, and dynasties. This was something Whitney, who is a local artist from Minnesota, found inspiring.

“It inspires me on many different levels and I love the creator’s vision … it’s breathtaking,” she said, complimenting the use of colors.

“The colors up there are incredible. If people in the audience aren’t impacted by it, I’ll be surprised,” she added.

Shen Yun patented this backdrop design in 2016, according to the company’s website. The backdrops act like magical windows into a different world and allow performers to travel back and forth between the stage and the animated backdrop.

Whitney’s friend Fran Weir enjoyed learning about the history and culture of China throughout the matinee performance. He said it is important to hold onto a nation’s history in order to understand the culture.

Shen Yun tries to portray different aspects of Chinese history in its 20 or so vignettes. Some of these include sophisticated dance pieces on palace grounds or folk dances in villages. Meanwhile, some pieces contain stories that were recorded in history, or literary works that recount ancient myths, bygone heroes, or celestial paradises. They embody traditional Chinese values like loyalty, filial piety, and veneration for the divine.

“China has the longest history in the world, so really it’s important to hold onto that,” Weir said.

In addition, China itself was once known as Shen Zhou, or the Divine Land. “This profound name describes a land where deities and mortals coexisted and a belief that the divine transmitted a rich culture to the people of the earth,” according to Shen Yun’s website.

This spiritual aspect of traditional Chinese culture comes through in Shen Yun’s program in many ways. Some pieces portray themes like spiritual devotion, the benevolence of gods, good and evil retribution, and the search for the meaning of life, according to the company’s website. They inspire the viewer and are meant to encourage reflection. Weir, who is a meteorology calibration technician at a university in Massachusetts, said he thinks this aspect of the culture is also important.

“The spiritual aspect is important. You need to hold onto that,” he said. “It’s a big part of any history of any culture. It’s part of the whole Chinese culture.”

With reporting by Sophia Zheng and Janita Kan.