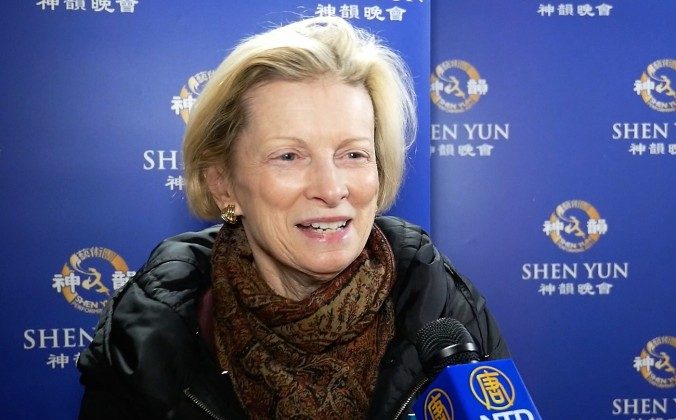 The New York-based Shen Yun had its sixth night of performances in New York City on Friday. The company’s mission is to revive 5,000 years of Chinese civilization through music and dance, according to its website.

Ms. Pemberton was especially taken by the costumes representing different ethnic groups in China—”their hats, tunics, and boots,” she said. There are 55 officially recognized ethnic minorities living in China. Differences in their cultural traditions and local geographic conditions lend themselves to each ethnicity’s unique and distinctive dance style.

“The colors and the designs were just outstanding,” said Ms. Pemberton, who began her art career as a costume designer for film and television. She plans to do more research into the costumes as future inspiration for her work.

Ms. Pemberton mainly does landscape painting. Her work is in private collections in Germany, the United Kingdom, and throughout the United States, according to her website.

She was also glad to be leaving the performance having learned much about China’s folklore and history. “It’s a calming, ‘non-New York’ experience. We need that once in a while, you know?”