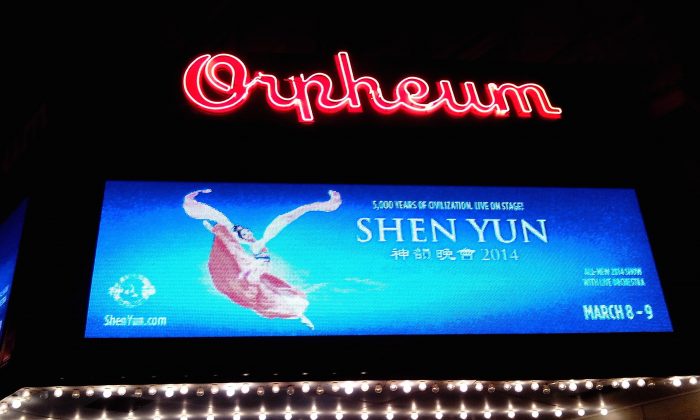 OMAHA, Neb.—On this evening of March 8 at the Orpheum Theater, Shen Yun Performing Arts dazzled theatergoers in its first of two performances in the city known as the Gateway to the West.

Shen Yun Performing Arts is New York-based. It has four touring companies that perform in at least 100 cities in 20 countries each season. Among the Midwestern cities Shen Yun has still to visit Kansas City, Indianapolis, Louisville, Madison, and Chicago, to name just a few.

Ms. Parks said, “I think it’s wonderful, I think it’s amazing what they can do and the dancing is fantastic.”

“It’s great—the story and wrapping it in with the classical dance,” Mr. Wax said.

An important component of classical Chinese dance is its attention to a dancer’s inner spirit and his or her ability to convey deep emotional expressions. Through dance, song, and live orchestral music, the performance brings to life legends and heroes from China’s long and rich history.

“All parts I think are really interesting because it’s telling a story of Chinese culture,” explained Mr. Wax.

“I liked the chopsticks dancing just because everyone is in unison every one is on foot at the same time and the verticals are amazing,” Ms. Parks said.

Mr. Wax enthusiastically pointed out, “There’s a lot about Chinese culture so it’s a good introduction.”