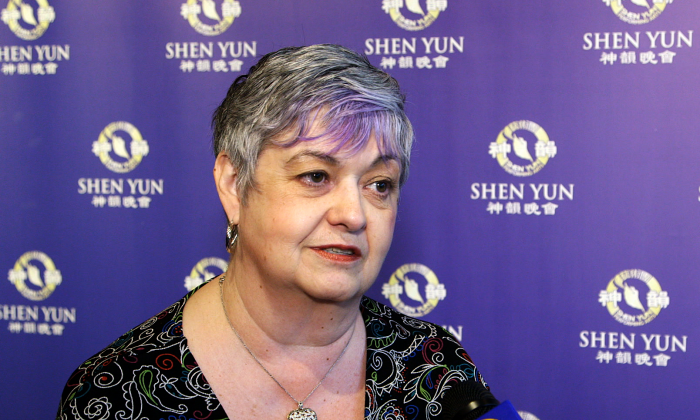 Karen Pincott enjoyed the meticulous attention to detail and beautiful colour combinations in the costumes worn by the dancers of Shen Yun Performing Arts, at the National Arts Centre in Ottawa on May 8, 2016. (NTD Television)

OTTAWA, Canada—Karen Pincott, a retired area manager for a company with a background in fashion and merchandising, has a good eye for colour and detail and was especially delighted by the spectacle of costumes in Shen Yun Performing Arts.

Ms. Pincott was at the matinee performance of the renowned classical Chinese dance and music production at the National Arts Centre on Sunday, May 8.

“It’s beautiful,” she said. “The costuming is amazing.”

She complimented the costume designers for the meticulous attention they gave to every garment and accessory.

“The colour combinations are beautiful in themselves, but where you’re sitting back, and probably anywhere in the auditorium, you would have a beautiful view of it because they’re so striking, and right down to the details when the [female dancers] have little crowns on their hands and you see the shimmer of those picking up,” she said.

“So, nothing is left to chance. It’s just so well put together.”

New York-based Shen Yun’s costume designers use bright colours to tailor and recreate hundreds of new pieces each season, as explained on the company’s website. They aim to provide an authentic presentation of the attire that comes from China’s traditional culture, which was believed by the ancients to be inspired by the divine.

The mission of the company, in its 10th year since its inception in 2006, is to revive this 5,000-year-old ancient heritage, which has been all but destroyed in China itself over six decades of communist rule. Shen Yun endeavours to revive the cultural essence of this heritage, which is defined by a respect for the divine and a belief in virtue.

Whoever has done this show certainly has a lot to be proud of, because it’s just relaxing, it’s entertaining, it’s informative, it’s fantastic.
— Karen Pincott

Ms. Pincott noted a calming as well as impactful effect that she experienced from the show, and in particular its colours and remarkable colour combinations that she praised earlier.

“It’s soothing but it’s striking because of the contrast,” she said. “The greens are so vibrant and the oranges just come alive, and when they do the one costuming with the softer blue and the pinks, it reminds you of flowers and movement because it’s all those colours and vibrancy, and then with the movements that they do, it’s spectacular.”

She was also impressed by the choreography and synchronicity of the performers, highlighting the oneness and togetherness they conveyed.

“The dancers are amazing, obviously. The way that they can move and synchronize together, it’s just like one dancer just blossoms onto the stage, the way they move and go. They’re just incredible.”

She also found the spiritual essence of the traditional Chinese culture very moving.

“It’s very touching to see. You get very caught up and you get very drawn to the stage. You’re in your seat but it’s almost as if in between the music and the movements they transport you right to the stage to them,” she said.

“Whoever has done this show certainly has a lot to be proud of, because it’s just relaxing, it’s entertaining, it’s informative, it’s fantastic,” Ms. Pincott said.

“I think it’s something anybody would enjoy wanting to see.”