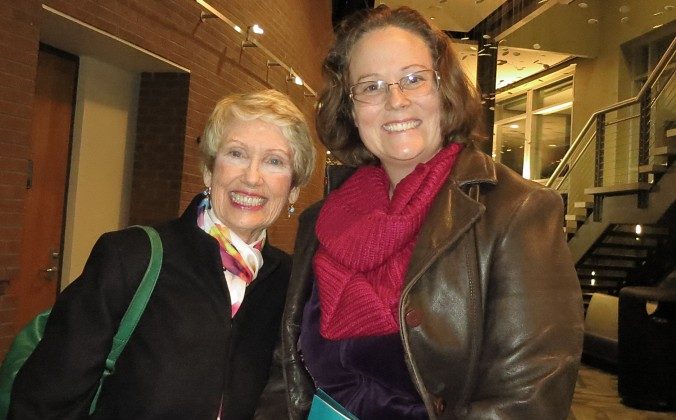 Dorothy Maldarelli and her daughter Suzanne Maldarelli attended the Shen Yun performance at the University of North Florida Fine Arts Center on Jan. 24. “The music and the dancing were able to translate the universal truths of loyalty, compassion, and kindness,” Dorothy Maldarelli said. (Sally Sun/Epoch Times)
City

ST. PETERSBURG, Fla.—While the Sunshine City has set the world’s record high of 768 consecutive days of sunshine in a row, there is yet another kind of light soon to warm the city: the compassion and beauty of Shen Yun Performing Arts.

The New York-based company is scheduled to shine onstage for three performances of classical Chinese dance, ethnic dance, and music at The Mahaffey Theater at the Duke Energy Center for the Arts on April 3 and 4.

Florida theatergoers have lauded Shen Yun during its 2015 World Tour for its spiritual content and universal values.

At the Jan. 24 performance in Jacksonville, Dorothy Maldarelli, a retired nurse who attended with her daughter, said, “I think what was beautiful is the fact [that] the music and the dancing was able to translate the universal truths of loyalty, compassion, and kindness.”

While Shen Yun features sophisticated dance techniques, an orchestra that blends sounds of East and West, and a dazzling backdrop, its essence is traditional Chinese culture, which originates from Confucianism, Buddhism, and Taoism.

Ms. Maldarelli’s daughter, Suzanne, said she was grateful for the freedom of religion and spirituality in the United States. She expressed sadness at the absence of such freedom in contemporary China.

Alecia Chan, an associate director with Legal Shield, attended Shen Yun’s March 28 performance in Orlando with her family. “It’s good to remember and take pride again,” she said of her Chinese heritage, which Shen Yun is reviving after more than 50 years of repressive communist regimes in China.

The Shen Yun website explains the current situation: “Forcing atheism upon society, the Chinese Communist Party has for decades launched various campaigns—most notably the Cultural Revolution—to destroy not only cultural sites, temples, and relics, but also the Chinese people’s belief in virtue and faith in the divine.”

“I was very touched because of the truth, the compassion,” Ms. Chan said. “At the end, we [the Chinese people] are still the same—[wanting] to be kind, compassionate, and truthful.”

Ms. Chan felt it was positive the masters of ceremonies informed the audience that Shen Yun cannot currently be seen in China. “People should know,” she said.

Compassion Could Change the World

Kim Rutledge, a bank project manager, was moved by the Shen Yun performance at the University of North Florida Fine Arts Center in Jacksonville, particularly the story-based dance called The Power of Compassion.

She said, “I thought [it] was extremely powerful and extremely true because when you show compassion and love people, even your enemies, you can win them over with that compassion and with that love. I thought that particular performance carried a very deep message.”