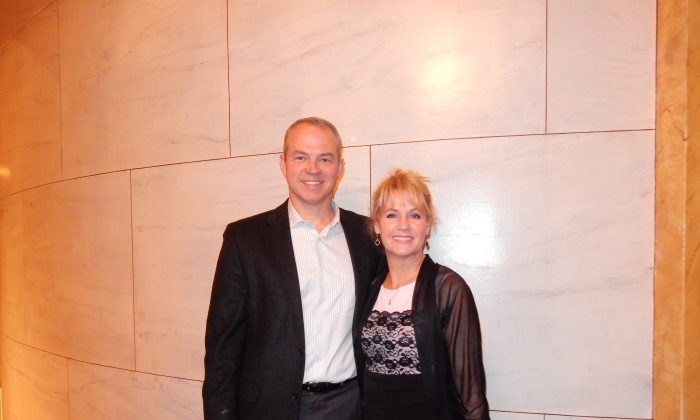 Mr. Paul Brotze and his wife, Tristie Brotze, at Shen Yun at the Academy of Music in Philadelphia on Jan. 9, 2016. (Lijie Sun/Epoch Times)

PHILADELPHIA—Art teacher Tristie Brotze came to Shen Yun both to celebrate and to learn. “The costumes and the way they flow are breathtaking,” Mrs. Brotze said. “I teach adult painting, and I teach children art. So I think the costumes and the movement of the fabric is beautiful with the music.”

“The first dance that we saw with the orange draping was stunning, and I love their use of, just the way the movement of the fabric kind of cascades from one performer into the next. It adds movement onstage,” she said.

That dance is “Salvation and Renewal.” In it, “trumpets sound in the highest reaches of the cosmos, and celestial maidens bearing lotuses dance among ethereal clouds,” according to the program.

Mrs. Brotze and her husband, Paul Brotze, celebrated their anniversary on Jan. 9 at Shen Yun Performing Arts at the Academy of Music in Philadelphia. Mrs. Brotze was curious about how the performers interacted with the digital backdrop.

She also spoke of the emotional tenor of Shen Yun. Mrs. Brotze said she thinks the performance can bring more peace and knowledge to the world.

The artist, who teaches at a studio in Chester County, thought she would take away new ideas from seeing the colors and costumes.

Every costume presented by Shen Yun performances display a spectacular spectacle—from the Tang Dynasty’s “Raiment of Rainbows and Feathers” to imperial dragon robes, phoenix coronets, and cloud capes; from the civil official’s headdress and robes to the warrior’s helmet and armor; and from the traditional rightward cross-collared Han clothing to the ethnic attire of the Manchurian, Tibetan, Dai, Mongol, and Uyghur ethnic groups, according to the Shen Yun website.

Costumes from every dynasty, region, and realm are tailored using bright colors and are given meticulous attention, making every piece an artistic masterpiece.

She said she learned about the challenges Shen Yun faces when endeavoring to revive China’s 5,000 years of civilization and culture.

“I’m gaining knowledge on how difficult it is to keep the roots in their culture and to embrace it,” she said.

Shen Yun presents traditional Chinese culture and values—which are centered on the idea of harmony between heaven and earth. Under a communist rule, these values that are deeply embedded in the culture have been systematically uprooted and destroyed. The performance aims to bring back these traditional values that are on the brink of extinction, according to the Shen Yun website.