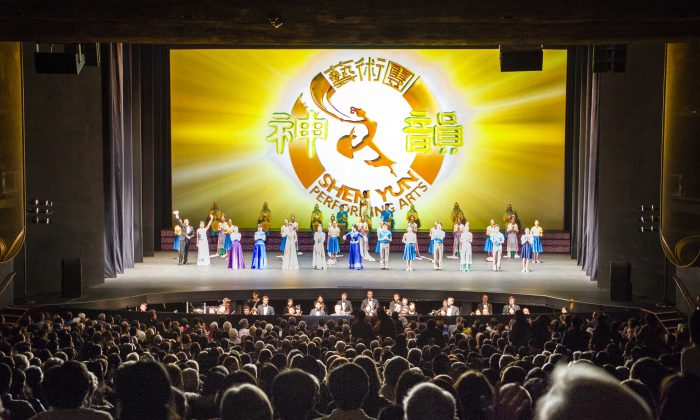 SAN JOSE, Calif.—”There are some things in life that are kind of beyond words,” said 3D graphics director John Grover. “There are certain things that you just—you can’t explain, you have to experience, and [Shen Yun] was one of those things for us.”

After missing Shen Yun last year, Mr. Grover and his companion, Cheryl, were really glad they made it this year.

“We loved it, it was beautiful. It was spectacular,” said Mr. Grover.

“It is breathtaking, and I want to cry,” said Cheryl after the show.

“Heavenly realms and timeless legends spring to life through classical Chinese dance. Dazzling costumes, thunderous battle drums, and powerful flips fill the stage with color and energy. Exquisite melodies and animated backdrops uplift your spirit and transport you to another world.”

“You could see the divinity in the performance,” Cheryl said. “It was beautiful, it was just beautiful.”

“The performance, and the color,” she said, “and seeing the fabric—it wasn’t just the dancers, it was an extension of themselves. And the stories were beautiful, and the graphics—when they jump behind the set, and all of a sudden they go up into the graphic against the wall.”

Mr. Grover said, “I loved the color, I loved the flow, like Cheryl was talking about, the flow of the costumes and all the dancers working together.”

Mr. Grover and Cheryl both expressed amazement at this backdrop, and since Mr. Grover’s profession is 3D graphic design, he can critically acclaim Shen Yun’s artistry.

“I loved it. And one of the things that I was impressed with about it was how the style merged with the style of the dance and the costumes, and the whole production. Everything flowed together perfectly, and it all worked together. It was very synced. It was beautiful. Well done,” said Mr. Grover. “The whole production of it was just beautiful.”

Each dance piece is accompanied by the Shen Yun Orchestra, which according to Shen Yun’s website, “masterfully blends the classical traditions of East and West. Ancient Chinese instruments lead all-original compositions created for each dance.”

“The music was incredible,” said Mr. Grover. “The combination of the different instruments from different parts of the world was beautiful. Just incredible.”

Cheryl was moved to tears by erhu soloist Lu Sun’s song, All for Today. The erhu is a traditional Chinese instrument with two strings, played upright with a bow.

“The instrument—I couldn’t remember the name, it had two strings—oh, I’ve got to get some more music about that, that made me cry,” said Cheryl. “It was beautiful, it was just beautiful.”