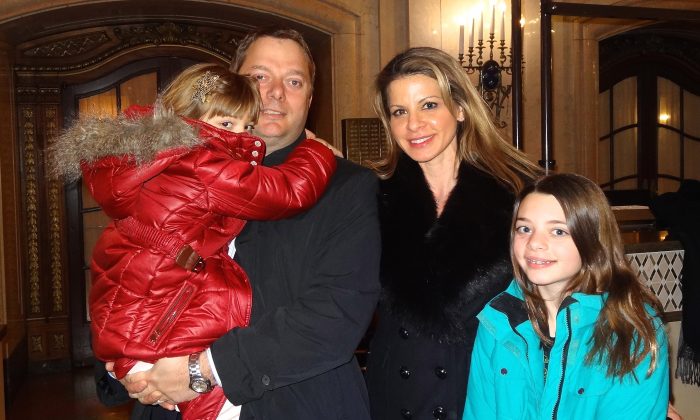 BOSTON—Harry Barbosa, a senior software engineer, said Shen Yun Performing Arts’ unique animated digital backdrop was fantastic and that he hadn’t seen anything like it before. Many others at the performance at the Citi Wang Theatre on Saturday also expressed amazement at the backdrop and said it was new to them.

Shen Yun uses state-of-the-art technology to open the stage to colorful scenes from China’s history and legends. But the backdrop doesn’t just set the scene. It is animated, and sometimes the dancers interact with it in surprising ways.

Kristian Kristensen, president of seafood company Cape Ann Seafood Exchange, and his wife Katrina, a teacher, brought their two young daughters to the performance. The children were captivated by the backdrop. Ms. Kristensen spoke of one of her daughters’ reaction to a heavenly scene: “She can’t believe how Buddha can just pop out of the screen like that. Just that whole effect was amazing. None of us experienced anything like that before.”

Shen Yun, a New-York based non-profit company, tours the world, reviving 5,000 years of Chinese culture. Buddhism, Taoism, and Confucianism are at the heart of Chinese culture, explains the company’s website, and the values of traditional Chinese culture are brought to the stage in Shen Yun’s story-based dances.

The vivid colors of the backdrop as well as the costumes “really hit me,” said Mr. Barbosa. “It’s just fantastic.” His wife, Donna Barbosa, who trained as an interior designer, said: “I’m actually floored by how beautiful it looks. I think it’s amazing all the colors, the way that the colors are combined.”

Mr. Kristensen was very happy to finally experience Shen Yun after having seen the advertisements for the past few years.

Mr. Barbosa said: “For anyone who has yet to see this, they should come to see it. We’re really enjoying it, we’re having a great time.”

His wife said, “I didn’t know what to expect, and I’m really, really glad that we came.”