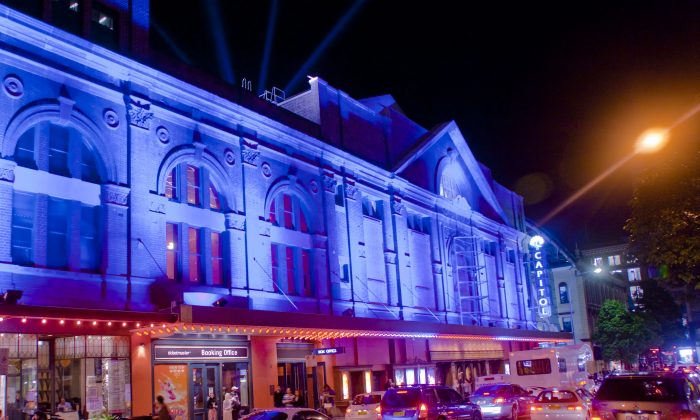 He returns every year because the classical Chinese dance and music company spreads China’s authentic culture, he said.

In its ninth year, Shen Yun continues its 2015 World Tour downunder in Sydney for five matinee sessions and five evening performances from Feb. 6 to 15.

With four companies performing simultaneously all over the world in more than 100 cities, each year Shen Yun puts on an entirely new program with new costumes and dances.

Formed in 2006, Shen Yun seeks to revive China’s ancient values, believed to be divinely-inspired, but almost destroyed by communist rule. Mr. Vinnicombe hopes Shen Yun will one day perform in China where the 5,000-year culture once flourished.

“What Shen Yun represents is spirituality and that’s what’s lacking in the world today,” he said.

“We can learn from Shen Yun that the spiritual basis of life is the most important, therefore, Shen Yun has got relevance to all the peoples of the world.”

Mr. Vinnicombe said he enjoyed the Feb. 7 evening show just as much as he had enjoyed previous performances.

“I’m just amazed at the talent of the dancers who can do all that tumbling and all the acrobatics … . “

According to Shen Yun’s website, many of the techniques seen in gymnastics today have been part of classical Chinese dance for thousands of years.

“What few people realize is that these gravity-defying techniques introduced to gymnastics over the last decades have, in classical Chinese dance, a history of thousands of years.”

Shen Yun ‘Is magical to me’

Patsy Gore, born in Singapore, was in awe of the state-of-the-art graphics technology. Shen Yun’s digital-backdrop team creates vividly animated settings, extending the stage and transporting the audience to a world where heaven and earth are one.

“The back stage [digital backdrops] is so good, so amazing it’s magical to me. You know there’s something new to look at each time.”

Many aspects appealed to Ms. Gore. “And I liked the way the music is done, the way they blend the new orchestra, the new and the old together. It came [together] very well, it’s amazing,” she said.

The Shen Yun Orchestra combines the spirit, beauty, and distinctiveness of Chinese music with the precision, power, and grandeur of the Western symphony orchestra. The result—two great traditions producing one refreshing sound, the website says.

“The choreography, the costuming, the colour, the stamina of the performers,” Mr. Dressler said, amazed by two hours of action with quick costume changes. “It was magnificent, much more than I anticipated.”

Mr. Dressler was captivated by the variety of music Shen Yun had in its production.

“The music was wonderful, I liked the way they interchanged it with having a bit of singing and a bit of playing. I very much enjoyed that Chinese instrument with the two strings, [erhu] that was wonderful.”

Shen Yun website says, “In its lowest and middle range, the erhu is especially stirring and somber, a quality eminently suitable for conveying the grand pageant of China’s history and the emotions of its people.”

He was glad that two bilingual emcees introduced each scene in both English and Chinese to help the audience understand what was coming up.

“I thought it was particularly very good to help people understand. Yes, it was a wonderful show.”

Mr. Dressler is a retired accountant and Ms. Dressler retired cooking teacher for the electricity and the gas company in Sydney, she said.