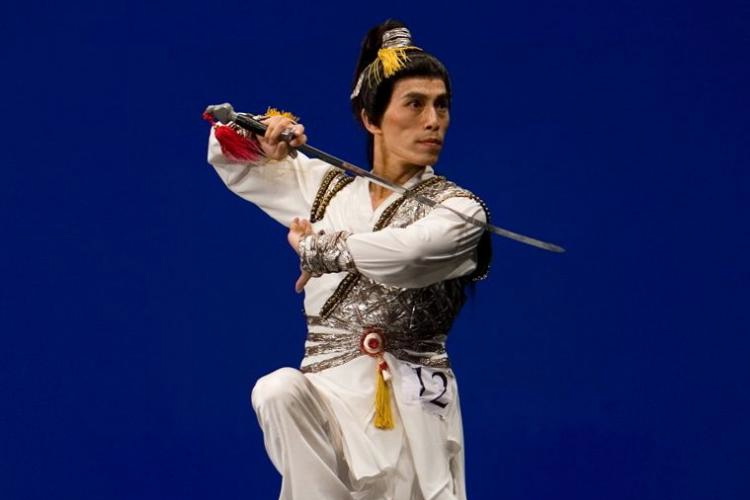 Shen Yun Performing Arts, based in New York, is the rapidly rising star in the performance world, characterized by the indomitable conviction that the riches of traditional Chinese culture belong to people the world over.

Shen Yun has stood alone, with the courage and integrity to move forward to revive, restore, and preserve the underlying theme of the sacred interconnectedness between the Divine, man, and the natural world, in spite of the complex climate in contemporary China.

An integral concept imparted by China’s more than 5,000-year-old culture is one widely acknowledged today: that of yin and yang, the concept of complementary opposites or dualities existing in dynamic relationship to one another, interacting in a nonrandom, meaningful way with the natural world.

Dance experts have frequently commented that the qualities of masculine vigor and feminine elegance displayed in Shen Yun dances are a profound example of the harmonious balance between yin and yang in traditional Chinese culture.

The extraordinary brilliance of Shen Yun’s all-male dances has not gone unnoticed by European dance audiences. Jeanne Brabants is the retired founder of Belgium’s Royal Ballet of Flanders and is a dancer and choreographer as well. She expressed her amazement over the number of male dancers, praising their discipline and stamina.

Ms. Brabants said: “What is fantastic about this group is that there are so many men dancing. In our country, … not in Spain and not in Hungary, but in France and Germany, we have a difficult time bringing male dancers into our companies. And [in this show] they dance so extraordinarily well, these men. Ours can’t be compared to these dancers.”

Lin Xiling is a well-known Chinese intellectual, who spent more than 20 years as an expatriate in France after being exiled from China in the 1980s for political reasons.

In an NTD Television interview, Ms. Lin shared her impressions of Shen Yun’s all-male performance in which they portrayed the men of the Tang Dynasty: “The great Tang Dynasty was the most splendid time in Chinese history. The Tang Dynasty’s men, to me, can ‘catch a tiger on the mountains and seize a dragon in the ocean.’ They are full of masculinity, confident, calm, and follow their pursuit of virtue with a solid will,” she said.

“I thought that in modern China, after more than 50 years of communist rule, … our nation’s backbone has been broken. Where can you see strong men with inner peace? A true man that can ‘carry virtue with iron shoulders’ is hard to find, but the Tang Dynasty drummers [Drummers of the Tang Court, a dance in the 2007 program] thoroughly display the Chinese men’s spirits and allowed me to see hope for our nations renaissance,” Ms. Lin said.

Mr. Chen began dancing at the age of 11 and graduated from the dance department of the Central University for Nationalities in Beijing, subsequently becoming a lecturer there. Before coming to the United States, he was a council member of the Dance Association of the Republic of China in Taiwan.

Mr. Chen recently spoke to New Epoch Weekly. He shared his impressions of what makes Shen Yun’s male dances so unique and remarkable, based on his understanding of classical Chinese dance and the essence of what he feels Shen Yun imparts.

“Classical Chinese dance has rich and profound inner meaning. In Chinese, the words for ‘dance’ and ‘martial arts’ sound the same, thereby alluding to their shared origin. The oldest form of Chinese court dance, in fact, was performed by soldiers and was characterized by masculine vigor,” he said.

Mr. Chen explained what distinguishes classical Chinese male dances from those of other modern male dances: “What we perceive as ‘masculine vigor’ is not barbaric or primitive, nor is it like the wild and unrestrained expression of modern dance forms.

“We are referring to an artistic expression of inner feeling, one that can be contained as well as released.” Restraint and timing contribute to the explosive intensity that characterize the male dances.

“Though this feeling is difficult to describe in words, many audience members have said that they can feel powerful energy watching Shen Yun,” Mr. Chen added.

Regarding the training of new performers, he said: “We inspire them through words. By explaining the rhythm and style of dance, we help the students learn not only visually, but also mentally. This is not merely a matter of training, but also one involving life experiences.”

Throughout the five years that Shen Yun has toured internationally, the male dances have continued to evolve, becoming progressively more difficult and diverse.

Audience members have aptly pointed out that while female dances can be expressed through the aid of elaborate costumes and a variety of props, such as fans and sleeves, male dances rely greatly on body movements, making the choreography more complex.

Mr. Chen agreed: “Chinese dances, in particular, have a high standard for technique. For female dances, often looking beautiful is good enough, but that is not the case for male dances.

“However, when we create choreographed works, we also pay attention to the combination of both simple and difficult movements,” he said. “If there are only highly technical stunts, that would lead solely to acrobatic or variety acts. Dance choreography must be full of changes and should coordinate different movements, thereby adding refined touches to the performance.”

Audience members have commented on how Shen Yun performances capture and hold their attention because they can experience one unanticipated surprise after another.

“To my knowledge, good dance choreography is achieved from experience and inspiration,” Mr. Chen said. “In the past few years with Shen Yun, we have produced an entirely new show every year, which is quite demanding on choreographers and composers. Even so, I feel that the degree of inspiration only continues to grow.”

What sets Shen Yun apart is that it’s not merely entertaining. “Our dances have morals that help people understand how humans should conduct themselves and what spiritual level they should pursue,” he said.

As an example, Mr. Chen cited a dance performance depicting God and the Buddha: “With the performers and backdrops synchronized together, you feel like you have reached heaven. It is something that is just so transcendental.”

He said that while mainland China has dance companies that may incorporate some similar elements, they do not possess any special brilliance: “Shen Yun, however, is very different. The backdrops coordinate perfectly with the performers, allowing the audience to truly envision themselves in the heavens and experience peaceful, beautiful realms. This is a one-of-a-kind experience.

“Of course, the entire program does not just consist of dances in story form. We also have dances that portray emotions, used to add a different twist to performances. Balancing the two elements allows the audience to feel peaceful and content.”