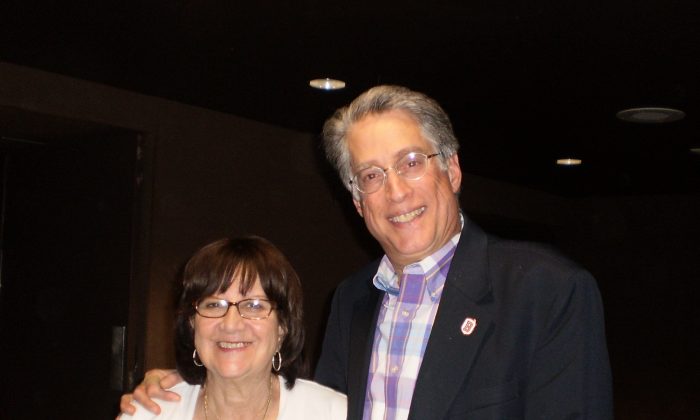 PEORIA, Ill.—Two professional artists, one in theater the other music, were greatly impressed with Shen Yun Performing Arts’ journey through 5,000 years of divinely inspired Chinese culture, at the Peoria Civic Center on March 15.

“It was magnificent, absolutely fantastic!” said Jeff Huberman, dean of Slane College of Communication and Fine Arts at Bradley University. He attended with his wife, Raquel.

Professor Huberman knows quite a lot about theater. He has 39 plus years as a teacher or administrator, has directed 70 theatrical productions, acted as a producer, and wrote two books and four plays.

Shen Yun’s mission is to restore ancient traditional Chinese culture and its wisdom. It does so with “the world’s foremost classically trained dancers, a unique orchestra blending East and West, and dazzling animated backdrops,” according to Shen Yun’s website.

“I love it. It was great” said Mrs. Huberman. “The dancing was outstanding, the actors, the acting. I was speechless, beautiful.”

What really impressed Mr. Huberman were the dancers along with the special effects of the animated digital backdrops, which interact with the performers for 17 mini-dramatic dances.

“The way they integrated the [animated backdrops] and live performances was just stunning,” he said.

For Mr. Huberman the story-dances were a highlight of the performance. He explained: “They were terrific actors, also. I’m in the theater, and I was very impressed. We were sitting in the third row and it was amazing—they are great performers, great actors.”

He was also amazed that the dance could be so descriptive in portraying a narrative of past and current historical events.

Both husband and wife would highly recommend the performance to others.

‘The Composers Do a Great Job’

Benson Lange, a project engineer for Caterpillar Inc. and a musician for the Peoria Municipal band was at the same performance.

From the perspective of Mr. Lange’s expertise, he was completely impressed with the music. “The orchestra is tremendous. I’m a low brass player and [this] low brass section—excellent, every musician. The integration of the erhu and the other Chinese instruments with the Western orchestra was excellently done. The composers do a great job,” he said.

The Shen Yun Orchestra combines the spirit, beauty, and distinctiveness of Chinese music with the precision, power, and grandeur of the Western symphony orchestra. The result—two great traditions producing one refreshing sound,” the Shen Yun website states.

Mr. Lange would definitely recommend the performance to others. “It is a new experience that is a diversity experience that does not fit into the normal Western kind of entertainment strictly,” he said.

“It’s a great opportunity to be exposed to another side of the arts. … If you like the different kinds of music and a different form of art, then this is a good place to come and see what the rest of the world is doing,” Mr. Lange concluded.