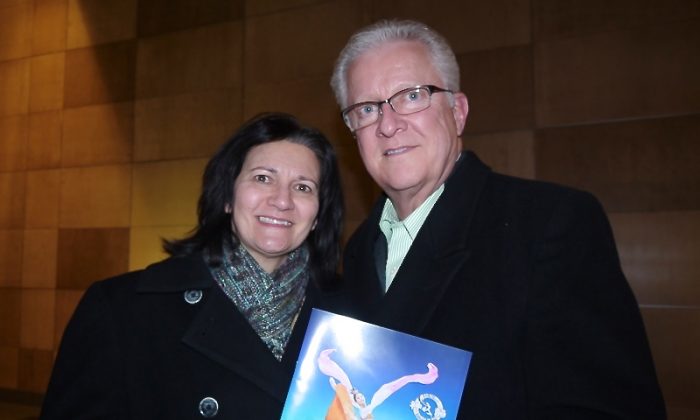 EVANSVILLE, Ind.—“It was beautiful,” Stan Ernest, a lawyer partner at Rhine Ernest said, after seeing Shen Yun Performing Arts at Evansville’s Aiken Theatre at The Centre on Jan. 28. He attended the performance with his wife, Peggy.

Shen Yun presents 5,000 years of divinely inspired civilization and its treasured virtues through dance and music. Legends, myths, and past and present history come alive through classical Chinese dance; ethnic folk dances; an orchestra that combines Eastern and Western instruments; dazzling costumes, and much more.

“I loved the stories that they told us,” said Mrs. Ernest about 20 mini-dramas presented through dance.

“The movement, the dancing, the music, all together … and the colors,” Mrs. Earnest said made her feel “inspired, awed. It’s joyful and brilliant.”

China was once known as the land of the divine, with principles like justice, benevolence, and respect for the heavens making up the core of the culture. These values, which come from the ideals of Buddhism, Taoism, and Confucianism, are present in its ancient art forms like classical Chinese dance.

Through some of the dances, Mr. Ernest found similarities between Eastern and Western cultures with regard to spiritual teaching of how to ascend to heaven. Mrs. Ernest agreed, and stated that she was reminded of the importance of living a good life, and even more so in our current times.