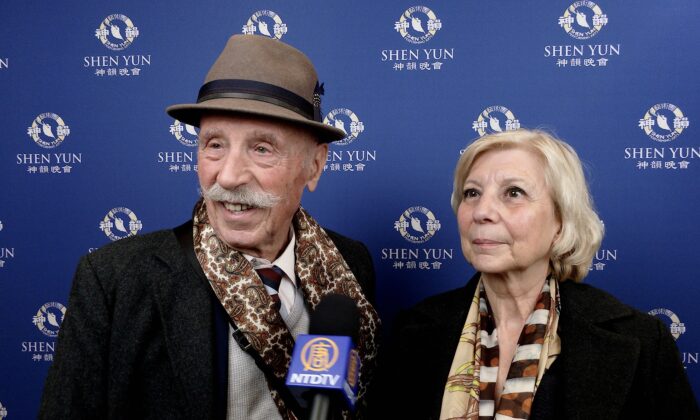 Michel and Jeanne Escudier, retired from the police, came to experience Shen Yun in Montpellier, France, on March 20, 2022. (NTD)

MONTPELLIER, France—Montpellier resounded with warm and joyful sounds. After almost two years of absence, Shen Yun Performing Arts was back to perform in the thousand-year-old city.

Michel and Jeanne Escudier were police officers in the Paris region, but missing the sun and sea of the south the retired couple moved to Agde, so they were at the March 20 Shen Yun performance at Montpellier’s Le Corum.

The Escudiers paid tribute to the lightness of the dancers.

“It feels like they are feathers! There is color, there is movement … it’s really beautiful, it’s magical! We had wanted to come for a long time, but because of Covid, the show was postponed, canceled, well—Now we are here, we really enjoyed it. It’s beautiful,” Mrs. Escudier said.

Mr. Escudier was also impressed by the dancers’ skills saying,  “to these actors who have a crazy talent” and “who give off the impression of taking off from the ground.” He thought of them as being like “Birds.”

The artists of Shen Yun are trained in classical Chinese dance. The art form has thousands of years of history and is actually the root of many other art forms that we know today, such as gymnastics and acrobatics.

For this retired police couple, it appears that to achieve such performances, Shen Yun artists must rely on more than skills there must be a form of spirituality that elevates their physical work.

“We see behind a colossal amount of work. They have to put in more than their physical talent … all their heart, all their soul to achieve such perfection,” Mr. Escudier said.

Continuing the Chinese tradition that every human should have a connection to the divine, the artists of Shen Yun practice the meditation of Falun Dafa, striving in their daily lives to apply the universal principles of truth, benevolence, and patience.

The Values at the Core of  Shen Yun

The former police commander felt that spirituality is at the heart of Shen Yun: “I love this kind of show that makes us touch things we have forgotten,” he said.

Mr. Escudier noted that “the confrontation between the present and the past was moving. It happens several times in the show … each time it’s things that remind us of the values we upheld in the past that weren’t so bad.”

The couple described the multiple emotions they were able to experience, “We laughed,” Mrs. Escudier said.

“There were tears that flowed, sometimes. Oh yes … there are moving moments,” Mr. Escudier added.

As a practitioner of Buddhism, Mr. Escudier identifies with many of these values: “Compassion, benevolence, of course, the values of the Buddha,” Mr. Escudier explained.

Mrs. Escudier concluded that she was reminded of the importance of  “appreciating the present moment. Because we need good moments like that. It warms the heart and the body surely.”