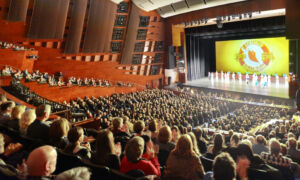 Shen Yun seeks to revive authentic Chinese culture, drawing inspiration from the 5,000 years of China’s rich civilisation and heritage, according to the programme book.

“I thought it absolutely stunning. I’ve never seen anything like it in my life. It’s perfect,” said Steven Wellington, head brewer at the Heritage Brewing Company, after the performance on Saturday night. “Everyone [on stage] seemed to be very, very happy.”

On learning that Shen Yun cannot be seen in China and that the communist regime has tried to suppress traditional Chinese culture, Mr. Wellington was surprised. “I still can’t quite understand why the fantastic history and the whole thing is being forbidden,” he said.

“I didn’t realise that it was quite so deep and quite so beautiful,” he said in reference to Chinese traditional culture. “Both the dancing, the music, the people—I’ve got a completely different idea about it now.”

As the dancers move in synchronised patterns across the stage, their handmade, vividly coloured costumes flow and shimmer, giving the dances a wonderful grace and dynamism.

“I loved the rain dance with the umbrellas and the one with the drums. … They were so exactly together with the beat and so energetic as well, it was really fantastic,” said retired primary school teacher Stella Saje at the performance on Saturday.

“Sometimes you feel really calm and the colours just wash over you. But the men—really amazing, how high they jump, how energetic they are—it’s just fabulous,” she added.

Story-based dances retell legends and fables from classics like the Monkey King up to modern-day stories of courage, compassion, and conviction. Some evoke laughter, while others stir deeper feelings of empathy or inspiration.

“It is very emotional—you’ve got sections in there that make you smile and laugh, and then the one that almost brings tears to your eyes,” said paramedic officer Liz Glendall at the performance on Saturday.

Mrs. Glendall’s husband, Russell, was impressed by the footwork of the dancers. “The pace of the footwork and the elegance and how lightly they tread and they seem to glide across the stage at times—it’s really good,” he said.

In one of the final pieces, tenor Tian Ge sings two songs with touching lyrics about the meaning of life. Teacher Jane Milligan reflected on the values expressed: “Wealth and status don’t matter but tolerance and kindness, compassion, those are the strengths and values that everyone should hold. It’s beautiful,” she said in reference to the song lyrics.

Recent science graduate Allan Burrows was also touched by the songs and the power of Tian Ge’s voice. “I thought [Shen Yun] was beautiful, especially the end, the opera singer. I thought that was very moving. It was beautiful,” Mr. Burrows said after the Sunday performance.

Darren Price, a musician from Coventry, was impressed by the sound and synchronisation. “It’s a live orchestra and the timing along with the dancers is second to none. It’s really good, really clever,” he said during the intermission of the Sunday performance.

“The experience of the evening will certainly stay with us for a long, long time.”

He urged all Epoch Times readers to go and see Shen Yun: “Don’t [just] read about it, go and see it; get your money out of your pocket.”