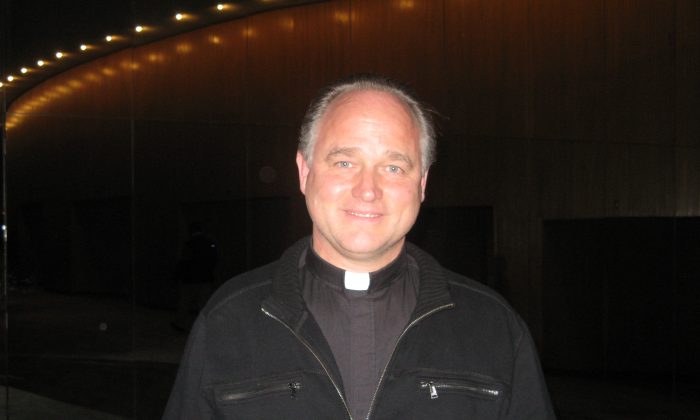 LONG BEACH, Calif.—Shen Yun—dedicated to bringing 5,000 years of divinely inspired Chinese culture to life through music and dance—was praised by  Fr. David Yankauskas and Fr. Craig McMahon of the St. Peter Chanel Catholic Church in Hawaiian Gardens. They attended a sold-out performance of the Shen Yun Performing Arts World Company at the Terrace Theater on February 7.

Fr. David Yankauskas who came with a group of 10 people to see Shen Yun, said, “It was beautiful. All the history, the culture, the religion, and the struggle for freedom is very powerful and very inspiring.”

Fr. Yankauskas was touched by the perseverance and striving for freedom displayed through the story-based dance pieces. “Especially for persevering and what each one believes—that’s the truth, that powerful message of the truth that will make us free, each one in their own expression. We’re guided by that inner light that we have, each one of us. And the beautiful thing is the expression, which is preserved in each one’s own culture,” he said.

The Shen Yun website gives some background on Chinese culture: “Principles such as benevolence and justice, propriety and wisdom, respect for the heavens, and divine retribution, all come to life, washing over the audience. Originating from Confucianism, Buddhism, and Taoism, these ideals are the essence of traditional Chinese culture.”

Fr. Yankauskas said he was inspired by Shen Yun dancers. “It was so inspiring and so moving to see the personal talents of each one. Each culture also has the particular characteristics you want to promote and preserve,” he said.

While Shen Yun is dedicated to reviving Chinese culture across the globe, it is both sad and ironic that it cannot be seen within China, where the regime sees traditional culture as a threat to its reign.

‘I’m very thankful for all the beautiful, inspiring message,” said Fr. Yankauskas. “If [the dancers] can’t express it in their own homeland, they can share it with the world, and that’s a very inspiring message for us also to appreciate what we have, which is freedom. We have to express our deepest convictions and to be able to help others also do the same.”

Fr. Yankauskas said he highly recommended Shen Yun to everyone: “Bring them all.”

Fr. Craig McMahon was also delighted by the performance. “My eyes were just drinking it all in. Beautiful. It’s a feast,” he said.

Fr. McMahon also learned more about the spirituality of traditional Chinese culture from the Shen Yun performance. “I just knew Confucius, but not about Falun Dafa. So it’s all new to me,” he said.

Falun Dafa (also called Falun Gong) is a traditional spiritual practice of meditation, exercises, and moral self-improvement that is rooted in ancient Chinese culture. Its core principles are truthful, compassion, and forbearance.

Based in New York, Shen Yun has become a worldwide phenomenon since its inception in 2006.

Fr. McMahon was impressed by the performance. “The projection was beautiful. They were heavenly,” he said. “It was a nice harmony between what was projected and the costumes that they were wearing.”

Not only did Fr. McMahon find the Shen Yun soprano was extraordinary while reaching the high notes, but he also found common values in the lyrics.

“I guess they were kind of ancient ballads about the truth coming and saving the world. They were very interesting,” he said.

The Shen Yun website explains the songs in Shen Yun: “The song texts the singers perform are original works written for these pieces. Brimming with philosophical reflection about human life and containing deep layers of meaning, the texts go beyond the boundaries of nation, race, and culture, and have been fondly received and appreciated the world over.”