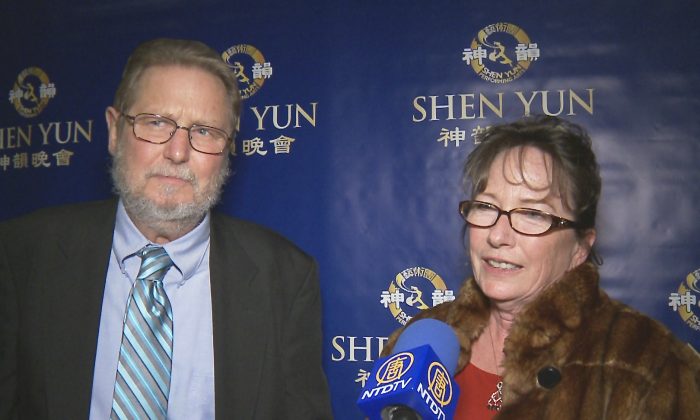 Susan and Jim Enkosky enjoyed an evening at Shen Yun Performing Arts at the Segerstrom Center for the Arts, on March 12.

COSTA MESA, Calif.—Susan and Jim Enkosky were ecstatic after watching Shen Yun Performing Arts at the Segerstrom Center for the Arts, on March 12.

“We love it, we love it; the dancing is beautiful, and it’s just gorgeous,” said Ms. Enkosky.

Mr. Enkosky is the president of a local production and electronic systems company, and Ms. Enkosky holds the role of CFO in the same company.

Ms. Enkosky said she particularly enjoyed the state-of-the art animated digital backdrops used in Shen Yun and the effects that were created with it, with characters flying in and out of the screen to appear on the stage as dancers.

Mr. Enkosky said he enjoyed seeing the dances, as well as the colorful, handmade costumes.

To have that many dancers perform so perfectly in synch is no easy feat, Mr. Enkosky added.

“That’s a big accomplishment on there, definitely,” he said.

Based in New York, Shen Yun has a mission to revive China’s divinely inspired culture. It features classical Chinese dance, an art form millennia old, as well as ethnic dances from different parts of China and an orchestra that combines traditional Chinese instruments with classical Western instruments, playing original scores that accompany the dances.

“[Shen Yun is] putting on a good show; you can tell when it’s a good show,” said Mr. Enkosky.