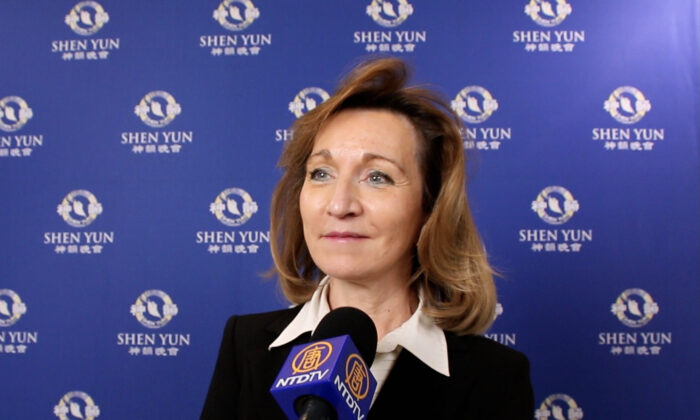 PARIS—Many audience members were touched by what they saw at Shen Yun Performing Arts’ first performances in France for 2022 on Friday and Saturday, among them many medical professionals.

Joëlle Dubois, a physician specializing in public health and social medicine, related to how New York-based Shen Yun was reviving traditional Chinese culture and how it gave full scope to the spiritual traditions that created much of China’s history.

“It is an evocation of otherworldly superior powers, the relationship between earth and heaven,” Dr. Dubois said.

Shen Yun leads to “a reflection on tradition and on bequeathing something through time,” she said.

“Especially in the context that we know, it is good to think that there are sure values, that there are things which are perpetuated,” she said. “It’s important for each of us not to lose contact with reality on a deeper profound level.”

Dominique Clavier, a clinical psychologist, said he experienced “lots of spirit, lots of emotions” during the performance.

This is something important “especially at this time when we are more confined,” he said in reference to the pandemic.

Dr.  Clavier added that in order to “be part of the world”, it is necessary to realize that “each culture is important and that we must value them and continue to feed them.”

Isabelle Lecardonnel, a cardiologist, was impressed by such “magnificent performances” that featured Chinese traditions and artforms such as dance.

“It really makes you want to go and discover these regions and cultures,” Dr. Lecardonnel said.

“We are asked to [by Shen Yun] to get closer to our roots and to find the simple and beautiful things in life,” she said.

“The search for purity is emphasized in the performances.”

“It’s absolutely wonderful … There are no words to describe what we saw. It’s really something beautiful,” Maroteaux said with his voice broken by emotion.

“It means a lot to me because it’s … ancient Chinese mythology. And that comes out a lot in everything that is done on stage. It’s really beautiful art. It’s beauty,” Maroteaux said.

“The music is sublime. The dancers have worked very hard to achieve this level of beauty,” he said.

“They manage to exalt the music. And the dance! It’s absolutely wonderful. It’s a really, really beautiful experience.”

“If we humans could become like that again, it would do a lot of people good … and probably all of mankind,” he said.

“It’s an experience that is an absolute must! Especially nowadays when we live too fast—it’s really something that is good for the heart and soul.”

The former head of the infectious and tropical diseases department of the Pitié-Salpêtrière hospital, Professor François Bricaire, attended the Shen Yun performance on  Saturday.

Very active in the management of the COVID-19 crisis in France, the professor considers that it is good that life does not stop and that the French can access art.

It is very important to go out, to see shows despite this pandemic that comes from China.
— Professor Francois Bricaire

“We need it,” he said. “It is very important to go out, to see shows despite this pandemic that comes from China. This situation forces us to try to do something else, and shows are part of it.”

His ballet-loving granddaughter, Lucie, received the Shen Yun tickets as a Christmas present.

“I chose very well, frankly I love it, it’s great,” she said, happy to have selected to watch Shen Yun.

“Yes, it is absolutely beautiful, very moving,” Professor Bricaire said. “I find it so beautiful because the show highlights the true Chinese culture and it is a great pleasure to admire the remarkable movements and coordination of the dancers.”

Reporting by NTD in France.