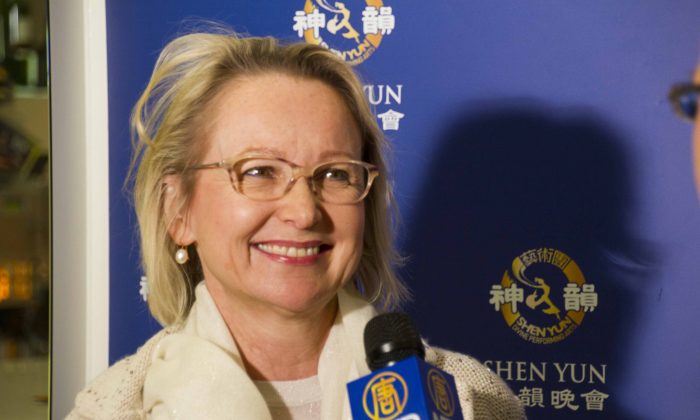 Her friend chimed in, “Beautiful! Very touching! There was pure beauty in the performance, as well as the music.”

“It was very impressive and formidable. The show not only touched cultural aspects, but also what is happening today in China, as well as religious issues.”

She continued,” The show was a good mixture, and I can’t say that one appealed to me more than the other. Every single scene had its own quality.”

The friends often meet to see different performances. “This time we met in Baden-Baden, and it was worth coming here and seeing Shen Yun for the first time.”

Ms. von Loga said that they decided on the spur of the moment to buy tickets.

“We both decided at the same time. I have to say that this is a wonderful performance. I must admit that I have never seen a show like Shen Yun.”

This is the first time she saw a Chinese dance performance. “Even the colorfulness and the types of dances are a first for me.”

“It is so amazing to watch the synchronization of the dancers, both men and women. And, it is amazing that the men are as agile as the women dancers. This show is unparalleled to anything we have seen.”

Her last thoughts before the show started after intermission: “It was most interesting that the divine beings came to earth, and that is how China was created. I found this very interesting.”

Reporting by NTD, Alexander Hamrle and Heide B. Malhotra