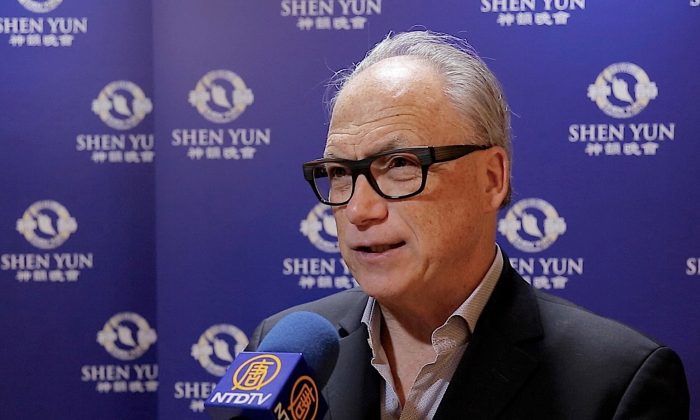 Jerry Inzerillo, CEO of Forbes Travel Guide speaks to NTD Television about the positivity of Shen Yun. He brought his family to Lincoln Center to see the classical Chinese dance program, making this his third time seeing it. (Courtesy of NTD Television)

NEW YORK—If anyone appreciates culture, it is Jerry Inzerillo, who wrote the book on travel, so to speak, as CEO of Forbes Travel Guide. Mr. Inzerillo also knows entertainment having also served as president and CEO of IMG Artists, the global leader in performing artist management.

Shen Yun aims to present the authentic and traditional Chinese culture through story-based dances, which give an overview of its 5,000 year history.

“China is one of the most fascinating countries in the world, one of the oldest and richest cultures, and to have a show like this that demonstrates all that Chinese positivity, I think is very welcome,” he said.

Mr. Inzerillo has brought his family to see Shen Yun a total of three times.

“To have that original, beautiful music played live, with the stunning choreography, with the beautiful costuming, with the little narrative on each story—it’s quite beautiful, and it deserves a lot of support as it tours around the world,” he said after attending the last performance at Lincoln Center this year, on March 13.

“When you look universally, 238 countries, what unites people? Dancing, music, costuming, food, beverage, culture,” Mr. Inzerillo said, and Shen Yun incorporate most of that in what it does, which he finds positive.

“So I think it’s a very positive message,”” he said. I think it’s very healthy for the soul, it brings people together.”

Nourishing the soul is at the heart of Shen Yun’s mission as it reminds the audience that once China believed itself to be the Celestial Kingdom, where moral values were adhered to and gods were revered.

“Whenever you have a positive message that shows that there’s more that unites us than divides us—especially with such an extraordinary culture of what China is—it should be supported, it should be celebrated, and it should be embraced,” he said.