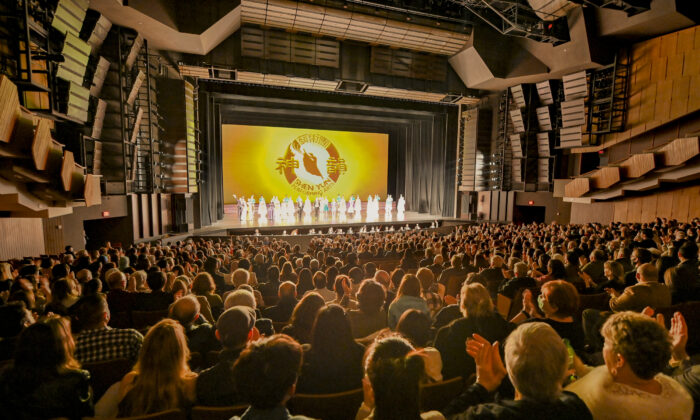 Based in New York, Shen Yun features classical Chinese dance and music, with a mission to revive China’s culture as it was before decades of communist rule all but destroyed it.

One of the unique aspects of Shen Yun is its use of a patented technology that enables seamless interaction between Shen Yun’s dancers on stage with animated backdrops depicting stunning scenes, such as of different eras in Chinese history or beautiful settings in the heavenly realm.

“I’ve never seen that before,” Mr. Munier said. “I found that really interesting, that the performers jump out of the stage [into the backdrops] and they become part of the background. That’s really good, really interesting.”

Grant Christopher, a writer, was similarly intrigued by the use of the animated backdrops.

“I’ve never seen that before. It feels very modern, but at the same time very classic as well. It’s a really nice combination,” he said.

Mr. Christopher said he’s happy to see so many people come to the Shen Yun performance and praised Shen Yun‘s use of a live orchestra. The orchestra is unique in that it’s the first in the world to permanently combine classical Western and Chinese instruments, creating a masterful fusion and a whole new realm in the world of classical music.

“You can just feel more energy and more life from the orchestra,” he said.

Shen Yun was founded in 2006 by a group of leading Chinese artists who made it their mission to bring the authentic Chinese culture to stages around the world. It’s an age-old culture with 5,000 years of history and deeply spiritual roots,  yet the performance can’t be seen in today’s China under the communist regime,

Mabel Tung, chair of the Vancouver Society in Support of the Democratic Movement, said that despite the current oppression in communist China, one feels “really positive” after seeing Shen Yun.

“I think it really lifts your spirit,” said Ms. Tung. “I think everyone should see [Shen Yun] and feel the positive spirit.”