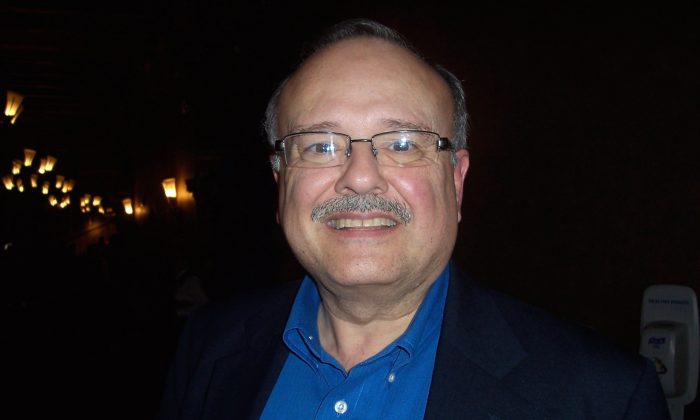 “Everything about the show is professional, polished, but at the same time there is very human element that reaches and touches your heart,” he said.

Mr. Miguel has been a pastor and a businessman, but currently he works in the financial services industry.

A Shen Yun performance features classical Chinese dance, a rigorous and graceful art form that can portray any kind of story or character. A live orchestra accompanies the dances, incorporating both Eastern and Western instruments and sounds, according to the company website.

Mr. Miguel was very impressed with the animated backdrop behind the dancers and the precise interaction with the background and the stories on stage.

“The way they could actually go to the exact spot every time was amazing, and it added so much to how the stories were told, to be able to use that animation.”

Mr. Miguel said the orchestra was “impeccable,” and he was touched by the solo performance of the erhu, saying it was very “beautiful and emotional” to witness.

Since 2006, Shen Yun’s mission has been to revive the true 5,000-year-old culture of China. Not only does it entertainment with dazzling visuals, it also presents traditional principles, “such as benevolence and justice, propriety and wisdom, respect for the heavens, and divine retribution,” says the website.

Mr. Miguel noticed a recurring theme throughout the performance of divine beings caring about people and being willing to come and help people.

“Another aspect of that was the aspect of love and compassion that was communicated, in the face of anger, in the face of persecution,” he said. “Instead of becoming bitter, angry ourselves, that we sow seeds of love. Those seeds will bear fruit ultimately. That’s how we can see change come.”

Mr. Miguel said people “need to see” Shen Yun and he would tell others about it.

Shen Yun Is ‘Healing for the heart, the soul, and the mind’

Audience member Ellie Pechet, an international healer, loved Shen Yun so much last year, that she came back again this year and brought her friends.

“I think it’s very healing for everybody who watches it, everyone who attends,” she said. “It’s healing for the heart, the soul and the mind and we need this today.”

Ms. Pechet said she felt inspired and uplifted by the stories told within the dances, which she felt had profound meaning.

“The stories are about forgiveness, about enlightenment, about meditation, about getting in touch with one’s source and one’s higher self,” she said. “It’s all of the virtues that we aspire to, and it’s helpful for everyone to be reminded of.”

She also loved the dancers, the beautiful colors, the music, and the special effects, which she said were all state-of-the-art.

Ms. Pechet felt that the spiritual message was transmitted through the dance, the choreography, and even the costumes.

“The message that I received is the importance of community and also of connecting with the source of one’s inner self and one’s higher self,” she said. “Both are important, to know who we are as individuals and to be able to connect and interact with community, with other people.”

“I recommend it to everyone,” said Ms. Pechet. “Everywhere it shows, it does good for everybody.”