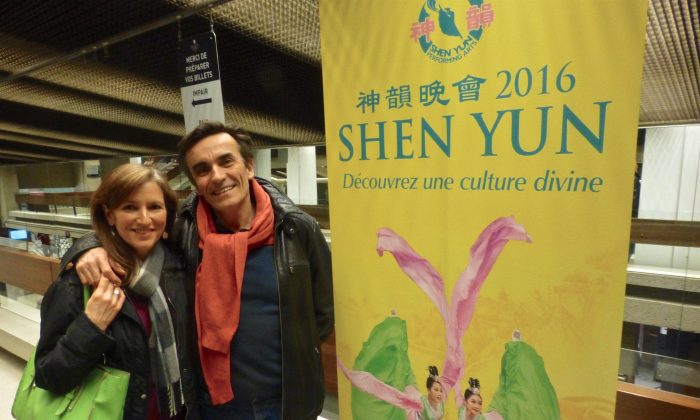 Singer Martine Watine with her husband, Thierry Watine, a journalism professor at the University of Laval, after seeing Shen Yun Performing Arts at the Grand Théâtre de Québec on May 4, 2016. (Mathieu Côté-Desjardins/Epoch Times)
Canada

QUEBEC CITY, Canada—Laval University journalism professor Thierry Watine and his wife, accomplished singer Martine Watine, came to see Shen Yun Performing Arts at the Grand Théâtre de Québec on May 4 and they were both taken aback by the performance.

Established in 2006 by overseas Chinese artists with the mission of reviving 5,000 years of glorious culture, most of which has been suppressed and destroyed since the Cultural Revolution (1966-76) in China, Shen Yun has since become the world’s premier classical Chinese dance and music company, performing for millions of people around the world every year.

“I’m enchanted,” said Mr. Watine, who was particularly impressed by the technical precision and synchronicity of the dancers.

“Frankly, I would say that even though I’m not a dance specialist, I found it was extremely well done–it touches on perfection.”

She and her husband were both impressed by Shen Yun’s orchestra, which combines Eastern and Western instruments to produce a fresh, harmonious sound that blends the beauty of Chinese melodies with the power and precision of the Western orchestra, as the program book explains.

They were particularly touched by “Divine Elegance,” a stirring performance by erhu virtuoso Lu Sun. An ancient Chinese instrument, the two-stringed erhu is known for its hauntingly beautiful sound and expressiveness, said to be most similar in sound to the human voice.

The couple was also fascinated by the spirituality reflected in Shen Yun’s vocal pieces. As spiritual people, the messages resonated with them and gave them another perspective on spirituality, particularly the idea that people originate from heaven and will return there one day.

“In a performance like this you have to let yourself go and admire what is presented to you. We are enchanted by this evening,” he said.

Also in the audience that night were friends Karine Lamoureux and Christiane Boucher, who were also in for a special treat.

“It was magnificent, it was absolutely beautiful! It was like an encounter with paradise,” said Ms. Lamoureux, a social worker.

“It was very inspiring—lots and lots of colours, the joy, the beauty, the harmony. And I really liked the movements—they were graceful, so graceful,” she said.

Ms. Boucher was saddened that people in China cannot see Shen Yun under the repressive communist regime, which does not allow freedom of expression and freedom of belief. However, she was glad that Shen Yun can perform for other audiences.

“It is marvellous that they can dance for the rest of the world,” she said.

“It is a beautiful invitation to dive into the beautiful Chinese culture. It opens our hearts to all of the beauty that this world offers, and it is magnificent.”

Restaurant owner Soung Lythe has been in Quebec for the past 41 years, but seeing Shen Yun reconnected her to her Chinese roots.

Ms. Lythe said she would recommend the performance to her family and friends.

“I would tell them that it’s very beautiful. It’s a good performance—it will relax you—you forget about the time. You watch, you journey into the music, into the dance and everything.

“At one moment I forgot everything about my day-to-day life,” said Ms Lythe, who found the experience of watching Shen Yun to be a therapeutic.