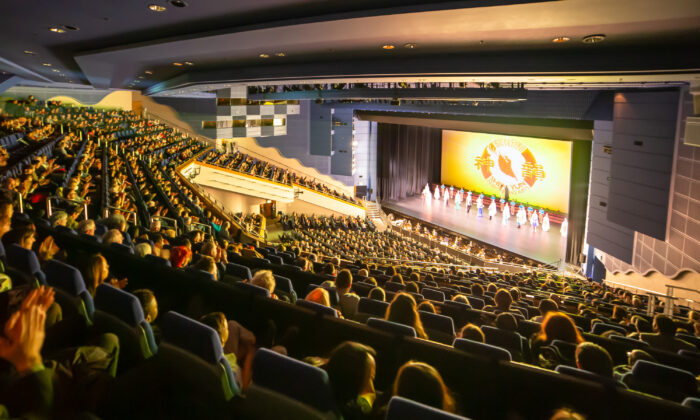 Shen Yun Performing Arts take a curtain call at their performance at the ICC in Birmingham, United KIngdom, on April 2, 2022. (NTD)

BIRMINGHAM, U.K.—Shen Yun Performing Arts touched and inspired a packed audience in Birmingham on the evening of April 2 at the ICC.

“It’s just fantastic! Visually it’s just a phenomenon,” said Jennifer Anderson-Dixon, an interior designer and company owner, who had come to see the show with her husband. “The colours are amazing; the choreography and the stories that they are telling us are wonderful!”

She said she found the Shen Yun costumes very inspiring and hoped to bring vibrant and bright colours into her design work.

“The fabrics and the silks, and the textures and the way they’re layered, the costumes are phenomenal.”

Shen Yun’s mission is to revive the traditional Chinese culture that was all-but-lost under the communist era and bring it to life on stage with classical Chinese dance.

As such, Shen Yun draws on the spiritual themes that run through Chinese culture.

Mrs. Anderson-Dixon said that she and her husband were especially touched by one piece, “Three Hundred Years in One Day,” which explores the theme of predestination between a man and a woman.

“We really believe in that—that soul mates find each other, again and again, through several lives. We believe that of ourselves.”

She said they held hands watching the piece.

“To sit and watch that… it touched our hearts.”

Many audience members said that they were moved to tears by the beauty of the dances and by the themes.

The spiritual themes of some of the pieces also touched power station construction manager Ian Wright and his wife Anita, who is the company director.

Mrs. Wright said that the performance emanated an energy of calm and peace.

“I just felt a calm and a peace, where and your head is not thinking of other things—just there in the moment.”

She also praised the music, saying the quality of the sound was “amazing.”

Alongside the dance performances was a solo performance, with piano accompaniment, on the Chinese two-stringed erhu.

That erhu performance was described by Helen Gordon, a risk manager at the Ministry of Defence, as “breathtaking.”

Mrs. Gordon was taking in the show along with her husband, Donnie Gordon, who is a security officer at the Ministry of Defence.

They had come to see the show as a wedding anniversary gift.

Mr. Gordon said that it was an “unforgettable” experience. “It marks an occasion for us as well, so it’s quite a memorable show. Everything about it is just really good.”

Mrs. Gordon said that she had learned a lot about Chinese culture through the dances and was touched by the values and themes behind the performances.

“That’s one of the things that I think draws me into it.”

She said that the themes which stood out to her were those of honesty, of being true to oneself in the face of adversity, and of having strength and courage amidst difficulties.

Mrs. Gordon particularly highlighted one dance that she said had helped her to understand the oppression of spiritual beliefs, namely of Falun Gong, which is still happening in China today.

“I didn’t actually realize just how bad it was for people to not be able to celebrate that part of their culture, which is quite sad when you think about it,” she said.

The theme of spiritual persecution also touched Emily Jane Harris, a project manager, who had come to see Shen Yun with her 8-year-old daughter, Isabelle.

“It was very spectacular, but then obviously there’s the saddening element of it—that various practices aren’t allowed in China, which I couldn’t believe,” she said.

“Focusing on the show—brilliant, I think it’s probably one of the best performances I’ve seen.”

She said that the live orchestra was “very, very good.” She also had particular praise for the erhu solo. “Unbelievable. You can’t quite believe that amount of sound was coming out of two strings. It was incredible.”

Ms. Harris also had high praise for another unique feature of Shen Yun: the way it integrates a digital backdrop projection seamlessly with the performers on stage.

“I’ve never seen anything like that, it was very clever,” she said. “Absolutely incredible, and it was fun. It created another layer to the performance.”

Rabi Chowdhury, a renewable energy consultant, said he had waited for seven years to finally bring his family to see Shen Yun in Birmingham.

“I would totally recommend anybody to see this,” he said. In addition to the level of artistry, he also highlighted the integrated backdrop and the live orchestra with its blend of Western and Chinese instruments. To bring all of those elements together, he said “was just amazing.”

He said the portrayal of traditional spiritual themes, and of divine beings such as Buddhas on stage, “made me feel very much warm and warm-hearted.”