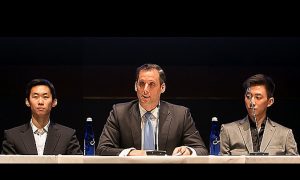 LONDON—Flips and tumbles as well as elegant movements. The expressive art form of Chinese classical dance dates back thousands of years. An art form that is being revived by New York-based Shen Yun Performing Arts.

Artists from its international company arrived in London’s Gatwick airport on Jan. 6, to embark on its all-new 2019 tour. Their first stop is just south of London, at the New Victoria Theatre in Woking.

“Classical Chinese dance has a history of thousands of years, and it is said to be descended from the heavens,” said principal dancer Vantanai Sae-Li.

He added that Chinese cultural values are expressed through the dancers’ movements on stage.

“[Classical Chinese dance] incorporates many Chinese values, portrayed using postures and movements. It is special because it also includes acting elements and a plethora of tumbling techniques,” he said.

While Sae-Li didn’t give away any details about the upcoming 2019 programme, he did say, “We definitely upped our game by perfecting our skills, and like always we’re bringing a whole new show.”

Established in 2006, Shen Yun has a mission of reviving China’s rich cultural history, which is almost lost in modern day China. It brings 5,000 years of Chinese culture back to life on stage, with its performances featuring classical Chinese dance, a digital backdrop, ethnic costumes, bel canto singing, and a live orchestra blending music from the East and West.

In some scenes, it’s as if the artists fly up into the heavens, as the live orchestra and animated backdrop work in sync with the dancers.

Trumpeter Eric Robins said that playing the trumpet is “a very all-encompassing role.”

“Our melodies are flowing and fluid and very much in coordination with what’s happening on the stage,” he said.

He added that the audience can expect another exciting performance this year.

At the airport, Shen Yun fans gathered to welcome the artists to the country.

One sign read, “I’ve waited 220 days for this moment,” counting the days from Shen Yun’s last performance in the UK.

Victoria Ledwidge, who came to greet the performers, said she is always excited when Shen Yun comes to the UK.

“Ancient Chinese culture is so full of beauty and wisdom and virtue, and we can learn so much from it, it’s amazing. The dancers are the most incredible athletes, they literally fly across the stage, and the backdrop is breathtaking, and the costume and the music it transports you to another world,” she said.

“[Shen Yun] shows the purity of the ancient culture of China. It brings back to life, those values that we’ve maybe forgotten a bit,” said Carina Depelean, who has seen the performance in previous years.

Depelean, who used to dance, said she finds the dancers’ skills amazing and wonderful.

Shen Yun’s international company is kicking off its Europe tour at the New Victoria Theatre in Woking, Surrey. In the coming weeks and months they will be performing in London, Edinburgh, Birmingham, Liverpool, Salford, and Plymouth.

The artists will also travel to France, Germany, Spain, the Netherlands, Austria, Switzerland, and Denmark.