Shen Yun: ‘There’s nothing like it on the planet!’ 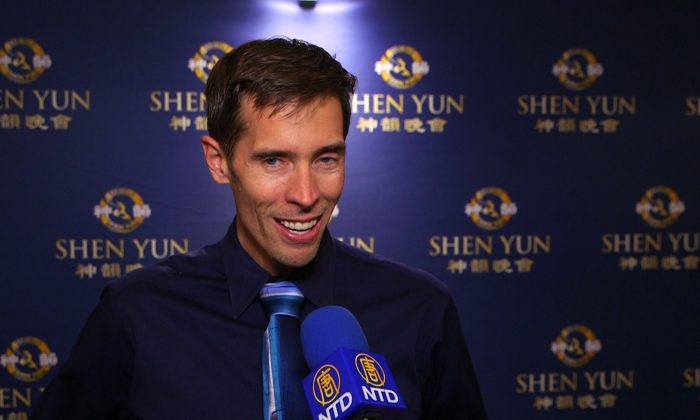 It was Mr. Witte’s fourth time watching Shen Yun, and he was in a group of more than 20 people.

Shen Yun is a non-profit, New York-based, classical Chinese dance and music company with a mission to revive the traditional Chinese culture.

The company website explains, “For 5,000 years divine culture flourished in the land of China. Humanity’s treasure was nearly lost, but through breathtaking music and dance, Shen Yun is bringing back this glorious culture.”

Each performance includes approximately 20 vignettes, each no longer than 10 minutes, that whisk audiences on a journey of ancient myths and legends, stories set in modern China, as well as through China’s rich ethnic and folk heritage, replete with beauty and principles such as benevolence, propriety, wisdom, and respect for the divine—the essence of Chinese culture.

Mr. Witte was enthralled with the stories.

“Storytelling is the most profound way to actually impact people,” he said.

He particularly enjoyed a piece entitled The Power of Compassion, which depicts the modern day persecution of the meditation discipline Falun Dafa in China. In the piece, a policeman injures his knee as he is in the midst of terrorizing two people, but he changes his violent ways after the two practitioners of Falun Dafa risk their lives and come to his aid.

Mr. Witte said the story was moving because it gives hope that people can be redeemed.

“To see the truth that we can be redeemed through the right practice and the right understandings of belief is amazing,” he said.

He added that traditional Chinese culture can offer a lot to our modern society.

‘I will never miss another show!’

Kenya Spaine, a student of naturopathic medicine at Southwest College, also attended the Feb. 12 performance at the Ikeda Theater .

She said she had been waiting three years to see Shen Yun. She had missed the performance for the prior two years. This year she thought, “I am going no matter what!”

“You can’t afford to miss it. I will never miss another show,” Ms. Spaine said.

She continued, “I have seen a lot of shows, but none like this. The colors alone just had you mesmerized. It was beautiful!”

Ms. Spaine was referring to the richly colored costumes as well as the digital backdrop, which creates a magical setting for each piece.

Ms. Spaine was touched by the passion of the dancers and their energy.

“I just love the passion the dancers had. It was awesome,” she said.

“You look at every dancer, and everyone was engrossed in what they were doing,” she said

Shen Yun’s website explains that the bearing, or inner spirit, of the dancers as well as form and technique “endow classical Chinese dance with incredible expressiveness, and vast creative potential. It can nimbly portray movements from daily life, as well as profoundly express the innermost transformation of one’s emotional state.”

“It’s the energy,” she said. “Whatever you want to call it. The energy is there.”

Ms. Spaine encourages all Shen Yun performers to continue to follow their passion for their art “because it’s a beautiful thing.”

She also wanted to buy tickets for all of her family members to see Shen Yun Performing Arts.

With Reporting by NTD Television and Albert Roman