Shen Yun: ‘The performers did a wonderful job’ 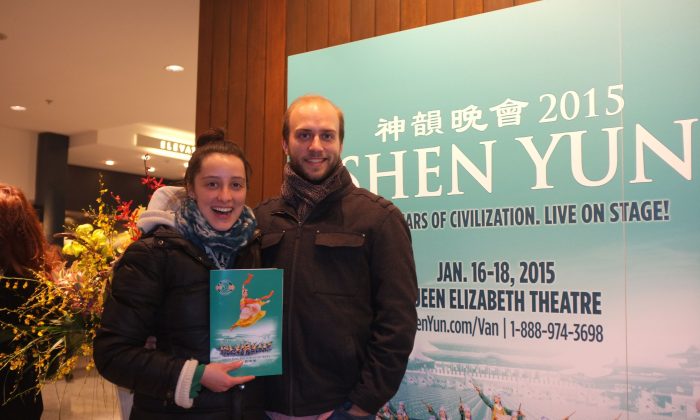 VANCOUVER—Acting students Alexandra Wever and Sean Sonier saw a lot to like in Shen Yun Performing Arts’ portrayal of classical China’s culture and traditions at the Queen Elizabeth Theatre on Jan. 17.

Mr. Sonier is studying acting at Langara College while Ms. Wever attends Studio 58, studying performing arts, acting, singing, and dance. She graduates this year. Both are rehearsing for parts in the musical “Oklahoma” starting in early February, presented by Langara.

They were blown away by Shen Yun, from the calibre of the dancers, to the live orchestral music, to the colourful costumes and digital backdrops.

“I thought it was great,” said Mr. Sonier. “The music was fantastic. I loved the erhu—that was a great sound. And the performers did a wonderful job, the images, the costumes. They’re well-trained performers. You can see the full extensions in everything that they do. It’s all there in their bodies and they were able to take the stage and bring that performance to a new level.”

Ms. Sonier also had high praise for the dancers.

“I love this show. I thought it’s outstanding work, and they’re not only doing a great job with the movement and the dance and the choreography, but they’re also capable of telling a story through dance and through their bodies and expressing all the emotions and the dialogue simply using their bodies, and I think that’s fascinating,” she said.

“And there’s comedy too. They were able to add humour and playfulness between the good guy and the bad guy.”

A piece that especially stood out for Ms. Wever was “Pheonixes of the Sapphire Paradise,” which shows the dancers rising out of a cloudscape dressed in azure skirts and fluttering capes.

“I loved the ladies with the peacock kind of costumes, the one where there was all fog on the stage, and they just popped out of the fog. That was beautiful. It was wonderful,” she said.

“And the singing and the erhu…that was beautiful too, beautiful sound,” she added, referring to the two stringed Chinese violin, which produces a mournful and haunting sound.