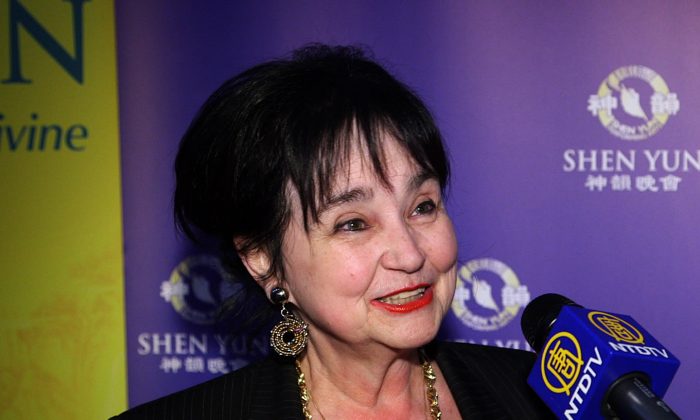 Marie-Thérèse Bégin learned a lot about the true Chinese culture after attending Shen Yun at Grand Théâtre de Québec in Quebec City on May 4, 2016. (NTD Television)

QUEBEC CITY, Canada—Shen Yun Performing Arts wrapped up a two-show run at the Grand Théâtre de Québec on May 4 with glowing reviews about its classical Chinese dance. Audience members found it touching, educational, and beautiful.

Shen Yun takes its audience on a 5,000-year journey of Chinese civilization through classical Chinese dance, an ancient art form that has been passed down from generation to generation. The art form is very expressive, but also extremely demanding to perform. It is at the origin of disciplines like martial arts and gymnastics.

Marie-Thérèse said she learned a lot, like the fact that the pirouettes and tumbling techniques are thousands of years old.

Clarissa, a teacher and longtime dancer and model, appreciated the hard work put into the show. “The precision, the effect of the group ensemble, and I adore the male dancers,” she said.

Shen Yun’s group dances—both all-male and all-female—also include folk and ethnic styles in addition to the classical Chinese style. “China has 55 officially recognized ethnic minorities, and their distinct ways of life reflect discrepancies in local topography, climate, and religious tradition,” according to Shen Yun’s website. “It is no surprise that these factors are also deeply embedded into each ethnicity’s dance style.”

There are a lot of meanings to the movements as classical Chinese dance is used in re-enacting ancient tales with characters young and old. It can also express a wide variety of emotions. Through classical Chinese dance, Shen Yun aims to preserve the ancient culture of China and bring it to millions around the world.

“Actually, I have no problem saying, this is the best show that was given to me to see,” Marie-Thérèse said. “I am amazed by the show. I recommend it.”

Also attending the performance were Johanne Lemay and Réjean Lacroix. They were fortunate to be sitting very close to the stage and they picked up on the facial expressions of the dancers.

“In their eyes, the concentration they showed, and the energy they gave off—a really wonderful evening,” said Ms. Lemay, a client services representative.

Mr. Lacroix, an accountant, echoed Ms. Lemay’s views. “What really impressed me was their dexterity, their concentration,” he said. “They had a focus, like they were in a bubble.

“It was really imbued with their characters.”

Classical Chinese dance has a certain physical bearing—a sensibility or inner spirit. The movements are distinctly Chinese, such as the total integration of the body and the rounded movements.

“It was really interesting. I really appreciated it,” Mr. Lacroix said.

“I came here having heard so many positive comments,” Ms. Lemay said. “I was eager to give my own comments. I highly recommend it.”