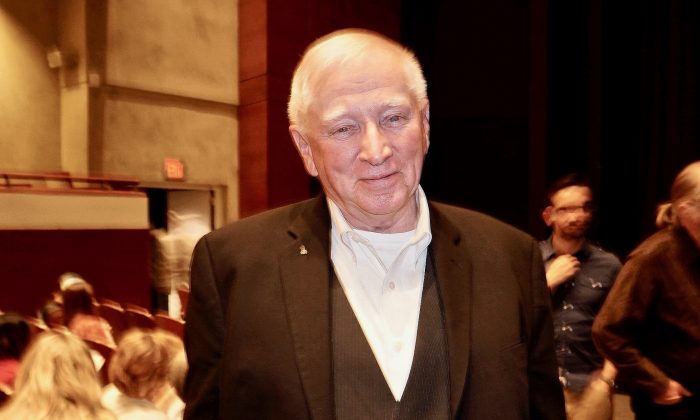 Dr. Edward Mullen was impressed by the story dances in Shen Yun Performing Arts. He attended the performance in Austin, Texas, on Jan. 5, 2019. (Sally Sun/Epoch Times)

AUSTIN, Texas—Government Professor Dr. Edward Mullen has been to China many times. Mullen represents the international organization, Rotary International, and goes to China on medical missions, like restoring vision to hundreds of people living in rural areas.

While in China, Mullen has experienced a variety of natural and manmade beauty China has to offer, including the lush landscapes in Xi’an to the grand Summer Palace in Beijing, and even the impressive Great Wall. But he has also experienced the side of this country that is untold—and often meticulously covered up by the Chinese communist regime.

On one of his trips in Shandong, the sun had barely risen when Mullen noticed a man doing some sort of Tai Chi-like exercise at the front of his hotel. He said the man seemed as though he was trying to get his attention. Suddenly, the police came up to the man and threw him into a car, taking him away.

This experience has had a lasting impact on Mullen. So when he saw dance pieces touch on the persecution of Falun Gong—a spiritual practice with meditative exercises— during Shen Yun Performing Arts, he was pleased that the issue was brought up.

“I believe it’s true. The one on Falun Gong,” he said. These pieces were particularly poignant in light of today’s real-life human rights abuses in China.

What Does Shen Yun Have to do With Falun Gong?

Shen Yun performers have to learn to embody traditional principles by cultivating their characters and self-improvement. Thus, many of the performers practice Falun Gong.

The performance also showcases some Falun Dafa-related dance stories and lyrics, which, like other stories, portray themes like spiritual devotion, the benevolence of gods, good and evil retribution, and the search for the meaning of life, according to the company’s website. Such values are foundational to traditional Chinese culture.

The professor, who teaches at the Austin Community College, experienced the performance on Jan. 4, at The Long Center for the Performing Arts in Austin. Shen Yun is currently touring the globe, with six equal-sized companies set to perform in over 100 cities around the world. Yet the one place it can’t perform is in China.

Along with being a rare witness to the incident, Mullen has had experience dealing with the Chinese regime himself.

“In my dealings in China, it has always been about government and business, which are not so beautiful. It’s not so sweet over there,” the professor said.

“I found that even the government responds to goodwill. When you go over there for business, not so good. But when you go there for goodwill, they respond,” he added.

He added that one of the Chinese regime’s priority is to ensure that they maintain power.

“When the oppressors have power, they don’t think much about universal values. They think about power,” Mullen said.

Shen Yun has a mission to revive these universal values and traditional culture that was nearly decimated under decades of repressive campaigns waged by the Chinese communist regime.

On a lighter note, he said the different stories that Shen Yun portrayed combined with the artwork in the digital backdrops were terrific.

“The artwork of the Forbidden City and the summer palace are pretty good. I enjoyed it a lot,” he said.