Shen Yun Teaches ‘Never Give Up’ 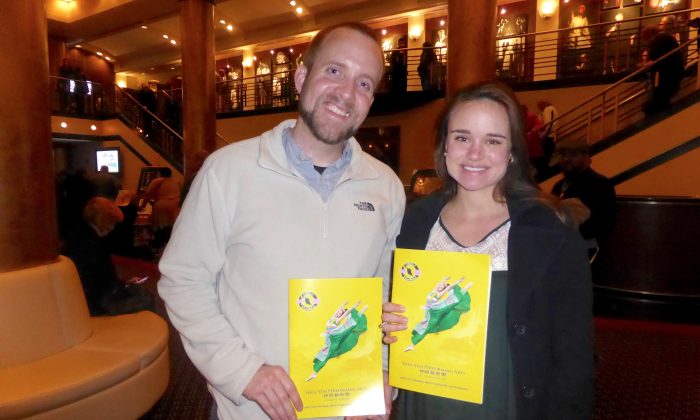 Casey and Sherri Cothran celebrating her birthday with tickets to Shen Yun Performing Arts at the Duke Energy Center for the Arts, on Jan. 13, 2016. (Mary Yuan/Epoch Times)

ST. PETERSBURG, Fla.—There are a lot of hard times in the world today, but that doesn’t mean we should give up, at least that’s what Casey Cothran feels. That’s also the message he took from an evening watching Shen Yun Performing Arts.

“Always persevere and you’ll find the light,” said Mr. Cothran, general manager of a brewery, after the performance. He took his wife, Sherri, to the Duke Energy Center for the Arts for her birthday, and she loved it.

Mr. Cothran appreciated the idea of reviving traditional culture. He believes future generations need to know where they’ve come from—important since he and his wife are expecting a child.

In addition to the dances, accompanied by an orchestra blending Western with traditional Chinese instruments, Shen Yun presents vocalists who perform original songs.

Mr. Cothran heard a message of perseverance in a song sung by soprano Tianling Song and shared his understanding of the lyrics: “Never lose faith. Always remember your path. No matter what you do, you can find your way back.”

He heard that same message echoed in one of the dances. Every dance, he said, had a meaning behind it, and he enjoyed each of these messages. In one, people of faith were being persecuted by the authorities in China—a situation actually going on China today. Yet the people did not give in to this repression.

Despite the struggle against those who tell people they can’t do something or can’t believe something, it is worth it, Mr. Cothran felt: “Never give up.”

“I hope that people can learn from this and understand and grow and learn from each other,” Mr. Cothran said of the last dance of the evening, “Hope for the Future.”

He hopes people will believe that even if they take the wrong path, they can find the right path back.