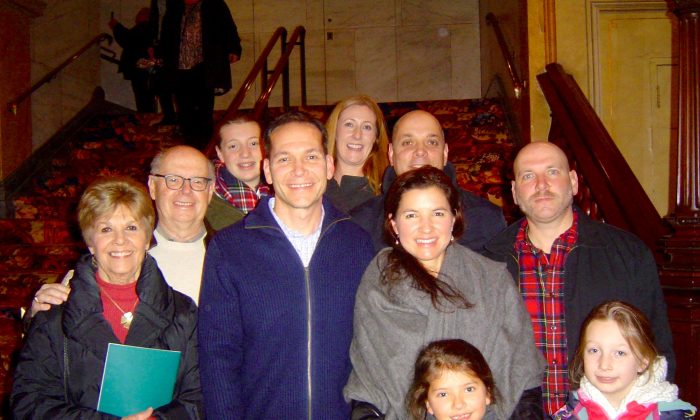 Peter Altringer (2ndL) saw the performance with his wife Susan Altringer (L), their children, and grandchildren on Jan. 10, 2016, at the Academy of Music in Philadelphia. (Frank Liang/Epoch Times)

PHILADELPHIA—Peter Altringer bought 10 tickets to Shen Yun Performing Arts as Christmas gifts for his entire family. And through the gift of giving, Altringer and his family experienced more of China’s artistic culture than he was able to get after visiting China a few years ago.

“There [in China] they’re more into the physical things, the warriors, etc.,” he said, comparing his visit to China with Shen Yun’s revival of authentic traditional Chinese culture through music and dance.

Mr. Altringer saw the performance with his wife Susan Altringer, their children, and grandchildren on Jan. 10 at the Academy of Music in Philadelphia.

“It was absolutely phenomenal,” he said about the performance. “The kids loved it.”

Mr. Altringer, a business owner and philanthropist traveled to Hong Kong in 1985 and then spent about a month in China and Japan more recently. He bought a replica of a soldier and had it shipped home from China.

But true traditional Chinese culture is more than physical objects, it’s a thousands-year tradition of spiritual self-discipline and a great respect for the divine, according to the Shen Yun website. Chinese people have always believed that divine beings passed on China’s rich culture to humans through the many dynasties.

Unfortunately, during China’s Cultural Revolution, many cultural and religious sites were destroyed and Chinese people were forced to revere communism instead of the heavens.

The classically trained dancers bring the essence of the original culture to life with their beautiful dance movements and their ability to express the deep inner meaning of moral principles like benevolence, justice, and wisdom through the movements.

For Mr. Altringer, who believes in Christian principles, the Shen Yun performance helped to remind him of his own understanding of right and wrong.

“We have a business, we treat people well, and try to do the right thing,” he said.

The performance also conveyed something else he took home with him.

“The message is hope … something you can identify with, at least I could,” he said.