Shen Yun ‘Takes You … to the Heavens’ 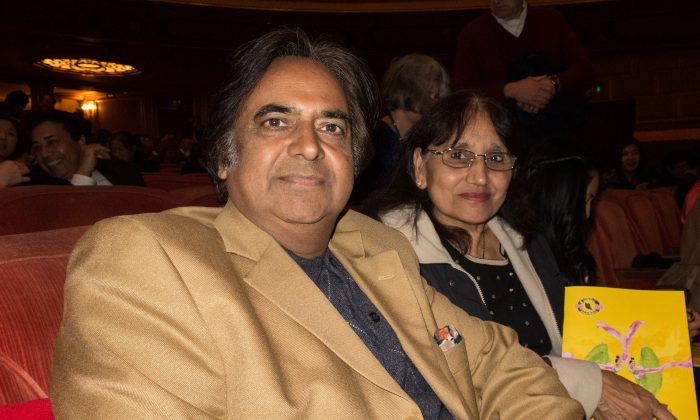 SAN FRANCISCO—For a brief moment in the City by the Bay, the worlds of gods and mortals united, revealing civilizations and imperial dynasties nearly lost to mankind.

It was opening night of Shen Yun Performing Arts in San Francisco, the epicenter of art and culture in the San Francisco Bay Area, held at one of the city’s finest cultural institutions—the landmark War Memorial Opera House, leaving a physician couple visiting from England feeling “a touch of divinity.”

“It takes you to another level,” said Dr. Surendra Sharma, still processing the monumental performance just behind him, “to the heavens,” his wife Dr. Indra Sharma finished for him.

The ancient Chinese believed their culture was bestowed by the heavens, resulting in a deep spiritual foundation and a society that looked inwardly and explored life, the universe, and the human body directly.

“It’s so surreal. Surreal is the word that can define the whole aura of this program. The dances, the music, and everything. The whole theme, the whole theme of this is very surreal,” Dr. Surendra Sharma explains. “It lifts you, it lifts your soul a little bit. You feel different, very different.”

This deep sense of divine origin is imbued in every piece of New York-based Shen Yun’s wondrous dance pieces. Dr. Surendra Sharma was enthralled: “It catches your imagination. The choreography was excellent. Full of visual expression.”

Coming from one of the world’s other ancient cultures, that of India, Dr. Surendra Sharma could appreciate the numerous stories about mystical figures and divine heroes brought to life in the performance, especially that of the Monkey King, illustrated in the dance titled “Monkey King and the Dragon Palace.”

“They gave that feeling of the divine feeling and the spiritual feeling of the show,” said Dr. Indra Sharma prior to departing for the evening, leaving behind a world of wonder and inspiration.

Shen Yun in its 10th year, continues to ignite the imagination of audiences around the globe, from Lincoln Center in New York to the London Coliseum, through “breathtaking music and dance” featuring “the world’s foremost classically trained dancers, a unique orchestra blending East and West, and dazzling animated backdrops—together creating one spectacular performance,” states the hotline introduction of Shen Yun.