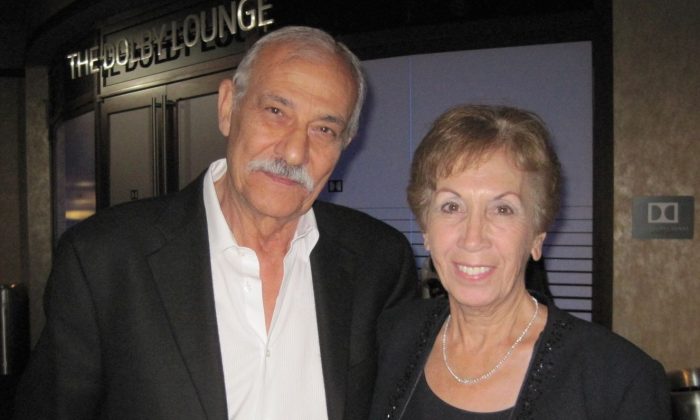 HOLLYWOOD, Calif.—Shen Yun Performing Arts brought the classic traditions of ancient Chinese music and dance to Hollywood on Saturday, Jan. 24, with two sold-out shows at the Dolby Theatre, home of the Oscars.

“It takes you to a different dimension,” said Heidi Ghattas, a local insurance agent.

“This is our first time, and it’s really, really beautiful,” she said. “Very classy, very entertaining. I can’t wait to see it again.”

“It exceeded our expectations. It really did,” said her husband Ray Ghattas, an aerospace engineer and owner of Ghattas Engineering. “Beautiful music, excellent performance.”

At the heart of Shen Yun Performing Arts is the richly expressive and rigorous art form known as classical Chinese dance, which has helped preserve 5,000 years of divinely inspired Chinese culture.

“China’s deep cultural traditions are contained in classical Chinese dance, allowing its movements to be richly expressive, such that the personalities and feelings of characters can be portrayed with unparalleled clarity,” according to the company’s website.

A unique live orchestra accompanies the dances and includes both Chinese and Western musical instruments and qualities. A dazzling, animated interactive backdrop provides color and substance to the stories contained within each dance number.

Rounding out the performance are solo musical numbers, which on Saturday included three soprano vocalists and a musical virtuoso on an ancient Chinese instrument called the erhu, a two-stringed instrument played with a bow.

Mr. Ghattas also appreciated the educational aspect of the performance.

China was once known as Shen Zhou, The Divine Land, and ancient Chinese people had a profound belief that the divine bestowed their rich culture upon them.

However, this tradition has been almost completely destroyed by communist rulers who consider “traditional Chinese values, based on the idea of harmony between heaven and earth, as a threat to its existence,” says the Shen Yun website.

This deep spiritual tradition really resonated with Mrs. Ghattas, who said she could barely find words to describe it.

“The whole thing is just really touching,” she said.

“You feel it when you’re watching. You feel that it’s true, it’s real. So it’s wonderful.”

Mrs. Ghattas said it was sad that Shen Yun could not be performed in China, saying this beauty should be shared everywhere. She would definitely be coming to see the show again.

‘Oneness with the Chinese people’

Also attending Shen Yun on Saturday was Edward Leamer, an economics professor and director of the UCLA Anderson Forecast. He said one aspect of the performance he really enjoyed was simply listening to the sound of the Chinese language spoken by the charming bilingual hosts of the show.

“I enjoy the way it sounds, the music that it makes when the speaker speaks. So we’re very much enjoying the whole show,” he said.

Mr. Leamer said he was impressed with the animated backdrop behind the dancers, which was incorporated into the stories and dancing sequences, allowing the characters to appear to perform unimaginable magical feats.

Shen Yun’s vibrant handmade, authentic costumes also stood out to Mr. Leamer. The costumes, and sometimes even cultural props, are also integrated into the dances, providing a rhythmic musical sound or unique dance movement that requires absolute precision, such as tossing and catching a colorful handkerchief in unison.

Overall, Mr. Leamer admired the preservation of such an ancient culture and its universal values.

“I think this is an important thing to do,” he said. “I think that we all need to hold on to our traditions, and the Chinese have this wonderful, very long history that needs to be cherished.”

Yet, however different China’s original cultural traits are from Western culture, the traditional spiritual values transcended all these differences and gave him a sense of familiarity.

“I feel oneness with the Chinese people,” he said. “I believe in much of the same things. Many of the messages here about compassion and treating people well—we all share that.”