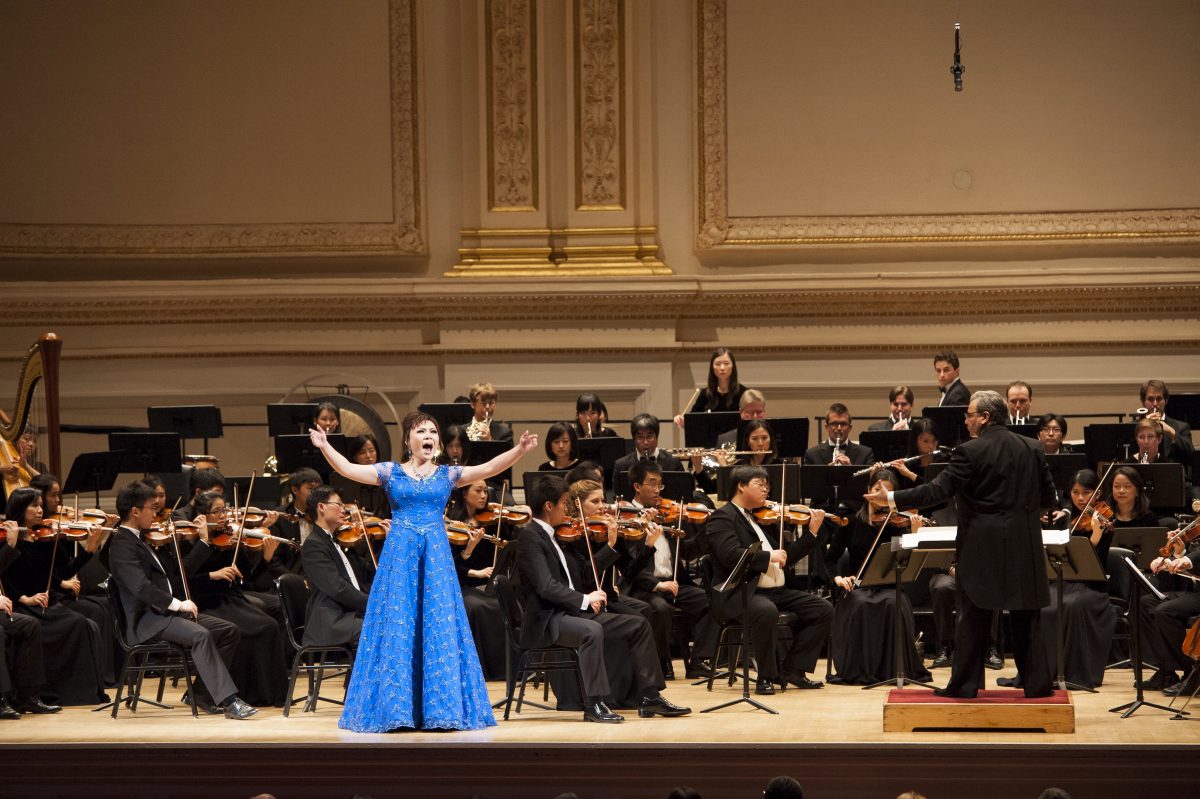 NEW YORK—It doesn’t matter if you’re unfamiliar with Chinese music. Whenever you hear an erhu, it will stir the core of your soul, said Keng-Wei Kuo, a conductor for Shen Yun Symphony Orchestra.

The erhu is a two-stringed Chinese violin with a 4,000-year-old history.

“People always find it moving because it is a part of a basic characteristic of humanity to be able to connect with this kind of music,” Kuo said.

Shen Yun Symphony Orchestra is a symphony orchestra that merges Eastern and Western instruments, and it is returning to Carnegie Hall on Oct. 5.

According to Kuo, no background knowledge is needed to revel in the mesmeric character of traditional Chinese instruments.

“It’s one of the instruments that is closest to original music heard by man,” he said. “That’s why there is a natural feeling to it that people connect with, even if they aren’t Chinese or familiar with Chinese music.”

The violin is also an age-old instrument. But with the addition of fine tuners, shoulder rests, and the alteration of sound post locations over the years, most violins sound quite different from the violins that were heard by Mozart.

The erhu is one of the few instruments preserved in their original form for the most part. Besides the erhu, many ancient Chinese instruments have a similar effect when heard—such as the 2,000-year-old pipa that resembles a Western guitar.

But combining Eastern and Western instruments in one orchestra is no easy feat.

The frequencies of the notes played by Chinese instruments vary from those of the West, making it difficult to harmonize Eastern and Western instruments on a large scale. But Shen Yun Symphony Orchestra has been doing that since 2006.

Kuo explains that Shen Yun is able to accomplish this harmonization because its composers understand how to preserve the innate qualities of the instruments from both cultures.

He noted that composers who have attempted the merger of East and West in the past tried to harmonize the Chinese instruments. They wrote Western flute parts for the Chinese bamboo flute, or dizi, and violin styles for the erhu. Shen Yun Symphony Orchestra composers do exactly the opposite.

But why combine music from two cultures?

There are many great qualities in Western music that Eastern music doesn’t have. A symphonic orchestra has the capacity to produce the richest sounds through harmony.

“This way, it combines the best qualities of both cultures of music,” Kuo said.

Much of traditional Chinese culture was destroyed during the Chinese Cultural Revolution (1966–1976). Even today, many cultural performances in China still hold Chinese Communist Party elements.

Shen Yun is currently the only performing arts company that is reviving truly authentic Chinese culture.

In addition to performing original Shen Yun compositions at Carnegie’s Perelman Stage on Oct. 5, the orchestra will also perform Western pieces such as Tchaikovsky’s Polonaise from “Eugene Onegin” and Beethoven’s “Egmont” Overture.

What Kuo finds most striking about Shen Yun Symphony Orchestra is that listeners find peace in the meaning behind the music.

For much of China’s 5,000 years, it was influenced by Buddhism and Confucianism, which advocate peace and harmony in society.

“Chinese music is imbued with characteristics from that time period. It is filled with this collective aim for sustaining peace in society,” he said. “Its music is performed for the good of others.”

“I’ve gotten audience feedback that they found they felt an inner peace after listening to our music,” he said. “People find it uplifting.”

“I understand that to be the case because they can use the simplest notes to convey the most profound ideas,” he said. Traditional Chinese music uses only five chromatic notes whereas the Western chromatic scale comprises 12 pitches.

“The music already has a profound message behind it,” he said. “So it doesn’t need extra notes like half steps to create something moving.”

The Carnegie Hall performances are part of the orchestra’s seven-city U.S. tour.

Amelia Pang
Journalist
Amelia Pang is a New York-based, award-winning journalist. She covers local news and specializes in long-form, narrative writing. She holds a Bachelor’s degree in journalism and global studies from the New School. Subscribe to her newsletter: http://tinyletter.com/ameliapang
Website
SHARE
Friends Read FreeCopyFacebookTweet
SHARE
Friends Read FreeCopyFacebookTweet
You May Also Like