Shen Yun Symphony Orchestra: There Were Inspiring Thoughts About Mankind 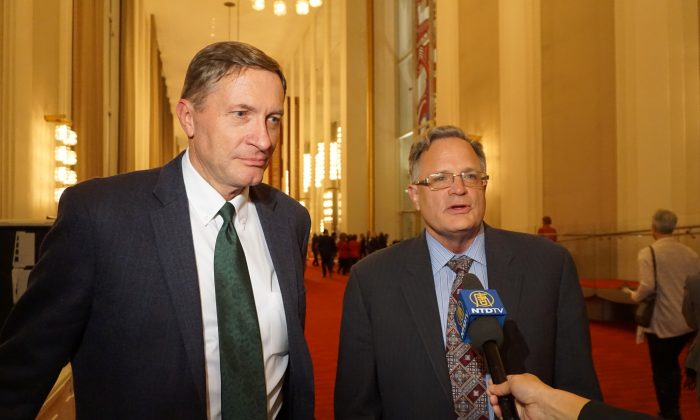 WASHINGTON—Of all the great things that can be named of Shen Yun Symphony Orchestra’s qualities—the music, the timing, and the musicians’ professionalism—none was more impressive and inspiring than the words sung by Shen Yun vocalists for some in the audience.

“There were inspiring thoughts about mankind and hope for mankind. And that was delightful” said Lowell Christensen, an engineer, who was back for his second experience with Shen Yun Symphony Orchestra at The Kennedy Center Concert Hall after seeing it the year before.

For Gary Stradling, a physicist, the lyrics likewise were very inspiring.

“I really resonate with the lyrics of the songs. And I thought they were bringing our minds to things that were important. And the music that went with them was important,” said Mr. Stradling.

Solo vocal performance is an essential part of the symphony orchestra. In these performances, vocalists showcase their unique ability to sing with perfect Chinese diction using the bel canto technique, a lost technique in modern world. According to Shen Yun’s website, the songs they sing intend to inspire people’s hearts.

While vocalists sing in Chinese, the lyrics of the songs, along with their English translations, are projected onto the digital screen.

“The singers were very talented and powerful,” said Mr. Stradling.

Besides the inspiring lyrics, Mr. Christensen found himself very impressed by the performance of violinist Fiona Zheng. He said, “The violinist was just amazing. Just like she was last year.”

Fiona Zheng, in an interview appearing on Shen Yun’s website, talks about how she drew on her personal experience when she performed Sarasate’s Zigeunerweisen last year, a song inspired from gypsies who were persecuted in Germany. She said she remembered how she and her father had to be constantly on the move to avoid persecution when they were still in China.

As for her secret to improvement as a musician, Ms. Zheng explained “I believe that when you improve your moral character and constantly elevate your spiritual realm, your craft will improve as well, just as if the divine is guiding you.”

Mr. Stradling said he walked away from performance with a great feeling and he would have a good memory of what he saw today. What’s more, he explained that he became aware of how much some overseas Chinese wish to see peace and harmony in China one day.

As for Mr. Christensen, he said he would be back again next year for the performance, and might go to see the Shen Yun’s flagship dance company in January.

With reporting by NTD Television and Frank Fang