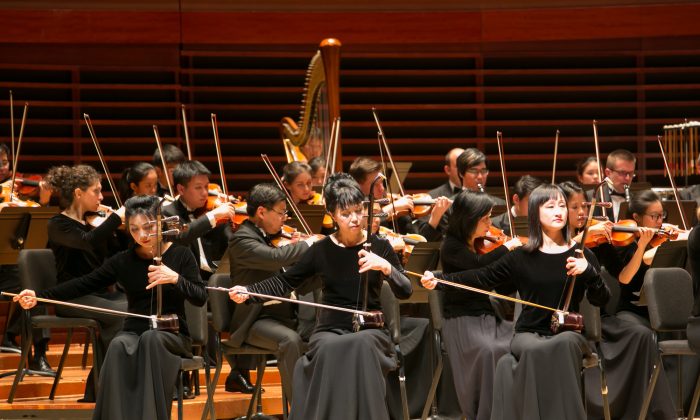 PHILADELPHIA—It is soul music, music that will touch your soul, Kavita Jayaprakash’s friend had told her, and so you must see it.

With a recommendation like that, Ms. Jayaprakash couldn’t miss seeing Shen Yun Symphony Orchestra when it came to the Kimmel Center in Philadelphia on Oct. 25.

Her verdict halfway through the Sunday matinee?

“Some things are larger than life. You cannot put it in words,” Ms. Jayaprakash said. “It’s truly soulful.”

The music of Shen Yun is indeed unique. The grandeur of a full Western symphony is combined with 5,000 years of traditional Chinese culture to create music that concertgoers have often called heavenly or majestic.

“You have to feel it in your nerves. It is there everywhere. You feel it, you live through it, so that’s how I felt here,” Ms. Jayaprakas said. “It’s something larger than life. You have to be here in person to feel that.”

Audience member Howard Joseph, a project manager at JP Morgan Chase, had similar feelings. Mr. Joseph had found Shen Yun online, and couldn’t wait to see it. During intermission, he said it was something that needed to be experienced in person.

“They speak to the soul,” Mr. Joseph said of the original compositions, which are distinctly Chinese in sound. “I think they’re beautiful. They are so creative.”

So much is expressed without words through the music, Mr. Joseph said, and thus words could not do what he felt justice.

“You have to see it for yourself to really understand,” Mr. Joseph said. The worry of the world and life are just swept away while he is in the music, he said. “It does take you away.”

Mr. Joseph has long had an interest in Chinese culture, and said he had studied anthropology as well. Traditional Chinese culture was once nearly lost under the 60-some years of communist rule, which has systematically tried to uproot traditional beliefs and values, and thus traditional art forms as well.

“I feel the culture,” Mr. Joseph said. “And being able to experience it is pretty special.”

“There are none better. They’re tremendous,” Mr. Joseph said. “Every piece of music I hear, I’m thinking it’s better than what I just heard.”

By NTD Television and Catherine Yang

The Shen Yun Symphony Orchestra continues its tour with a performance on Oct. 27 at the Woodruff Arts Center in Atlanta, and Oct. 31 at the Veterans Memorial Auditorium in Providence. For information about the orchestra’s October performances, visit ShenYun.com/Symphony