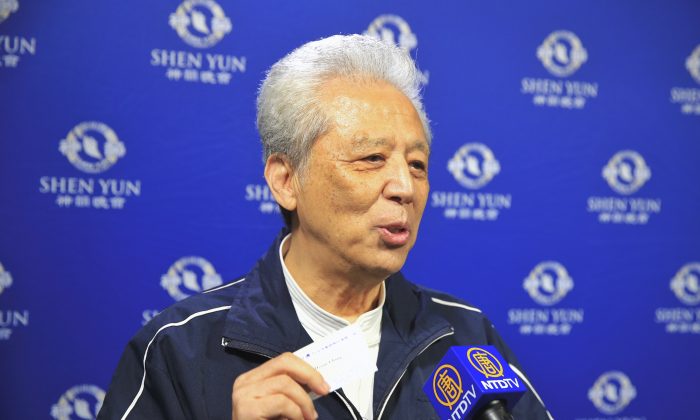 “I’ll come again for sure because such a spiritual feast is worthy of listening to again and again,” said Cheng Cheng-wu, a Taoist temple abbot, after attending the performance at Keelung Cultural Center Performance Hall on Sept. 21.

As for how much Mr. Cheng loved what he heard, he said, “Even only the three encore pieces at the end were worth every penny of the ticket.”

“It was a very pleasant evening. The orchestra is simply terrific,” said Mr. Cheng, who is also the founder of the Taoist Cultural Association in Taiwan.

“The program and its style is much different from that of other symphony orchestras,” he said. “The erhu was accentuated by other Chinese and Western instruments. And along with the drums, it was really awesome.”

Shen Yun Symphony Orchestra is one-of-a-kind, explained Tsai Hui-chih, a violinist from Taiwan, in an interview on Shen Yun’s website.

“Shen Yun combines the sounds of the erhu, pipa, or Chinese percussion instruments with Western symphonic coloring, and in so doing creates something totally original.”

As for Mr. Cheng, he paid very close attention to the pipa, a plucked Chinese instrument, and thought it was masterfully included into the music pieces, with each note of the instrument “captivating the audience” just at the right moment.

The pipa has long been considered as the “king” of Chinese folk instruments, according to Shen Yun’s website, and traditional paintings often depict heavenly maiden playing the instrument.

Mr. Cheng gave his thumbs up as to how the symphony orchestra was able to take a familiar Taiwanese piece, “Green Mountain,” and present it with a new interpretation while retaining the original taste of Taiwanese culture.

“It was simply brilliant.”

Shen Yun Symphony Orchestra was a feast for both body and soul, said Mr. Cheng, adding that “only this kind of music can really move people’s hearts.”

Mr. Cheng thought the performance would be good for people – those worried by cares, would see their troubles melting away.

“Especially when the three erhu musicians showed up. It was stunning,” he said, explaining that anyone would be “cleansed by the music, and feel carefree immediately.”

The erhu, the Chinese violin, goes back thousands of years, and can convey a wide range of emotions, according to Shen Yun’s website.

The orchestra’s music, briefly speaking, was “heavenly” and “struck a chord in people,” according to Mr. Cheng. “Such good music is rare nowadays,” he added.

“This spiritual musical deserves much promotion.”