Shen Yun Symphony Orchestra ‘Out of this World’ 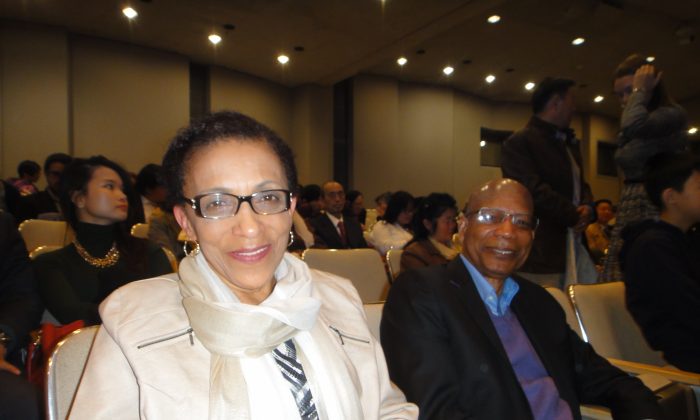 Marlene Campbell and Nigel Seales at the Shen Yun Symphony Orchestra at the Roy Thomson Hall in Toronto on Oct. 3, 2015. (Dongyu Teng/Epoch Times)

TORONTO—With roaring applause, audience members rose to their feet and gave a lengthy standing ovation at the end of the Shen Yun Symphony Orchestra performance on at Roy Thomson Hall on Saturday, Oct. 3, drawing two encores from the orchestra.

The Toronto performance was the first for the orchestra this year as it embarks on an 11-city tour across North America.

Based in New York, Shen Yun aims to revive China’s divinely-inspired culture. The orchestra, with its unique blend of traditional Chinese instruments and classical Western instruments, is part of Shen Yun Performing Arts’ dance and music production, and has been touring with its own orchestral performances every fall since 2012.

Toronto residents Marlene Campbell and Nigel Seales have been attending Shen Yun Performing Arts’ classical Chinese dance and music performances for a few years. But this was the first time the two saw the orchestra perform.

“I’m totally enjoying it. It’s something just out of this world. It’s very lovely,” said Ms. Campbell during the intermission.

Attending the concert, Ms. Campbell said, was “like experiencing” the Chinese culture.
“It’s very refreshing, something that I would attend again for sure.”

She said she enjoys the music and the history Shen Yun Performing Arts portrays, and that’s what brings her back to the performances each time.

Pierre Ackad, director of an IT company, said the orchestra helped him feel relaxed, and he praised the blending of Chinese and Western instruments.