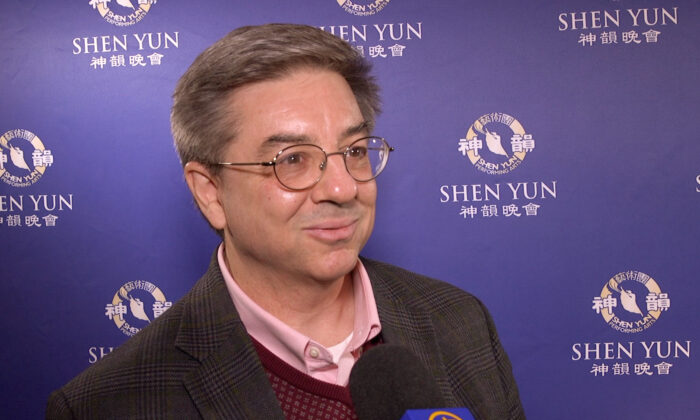 CHICAGO—John Vishneski, a conductor and clarinet player himself, was pleasantly surprised to learn that most of the pieces performed by Shen Yun Symphony Orchestra are original compositions.

“I got a wonderful feeling from the combination of the Chinese instruments [with Western instruments], and especially the percussion, that blended very nicely with the Western orchestra,” said Mr. Vishneski, who performs with the Chicago Bar Association Symphony Orchestra.

“I really enjoyed the way the Western orchestra was blended with the pipa and the erhu, and it was just fantastic, really enjoyable.”

Shen Yun, according to the company’s website, is not just an ordinary performing arts company.

“Preserving the traditions and virtues of humankind is the foundation of our artistic vision,” the website says.

The website adds that in its music performances, a Western orchestra serves as a foundation, “accentuating the distinct sound of Chinese instruments.”  The “bedrock of soul-stirring melodies from the ancient Middle Kingdom,” it adds, is brought to life by the symphony, and this is what makes Shen Yun’s music unique, and a “new frontier in classical music.”

“It moved me … there was power, there was beauty. It was like poetry, but with instruments,” he said.

As a conductor himself, Mr. Vishneski also praised the two conductors of the symphony orchestra, saying that they both “really connected with the orchestra.”

“It was just magnificent, I loved it.”

Edmond Estka, a photographer, said he was also impressed with the combination of Western and Chinese instruments in the orchestra.

“I’ve listened to a lot of music, and what I heard was truly amazing. The violin solo is absolute perfection. The conductors were excellent. The music director out of New York really put together a show, and the concertmaster is very good,” said Mr. Estka.

One of the music pieces even moved him to tears, Mr. Estka said.

“[In the ‘Ties of Affection, the Tao of Destiny’], the general stabs his daughter, and the divinity [manifests] in the statue, bringing her to life; it brought tears to my eyes. That’s how good that was.”

Chuck Bokar said he also enjoyed the “Ties of Affection,” and liked the fact that each piece has a story behind it and lets the listener “imagine what’s actually being played and happening.”

Mr. Bokar added that the music performed by Shen Yun “is not from the human world,” it’s “celestial, heavenly.”

“For me, the first piece [‘The World Divinely Restored’]  reminded me of the heavenly realm, and it was light and fast,” he said.

The performance, he added, is “very inspirational.”

Ms. Pham, who used to play the bassoon in the Pittsburgh Symphony Orchestra and at the University of Pittsburgh, said she also found she could follow the storylines in the music.

Pham also added that she found it interesting how the musicians knew “the intricacies and nuances of Eastern music,” and how the music was blended.

Steven Nicholas, who accompanied Pham to the performance, was also impressed by the blending of the Eastern and Western instruments in the orchestra, but said what really sets Shen Yun Symphony Orchestra apart is how it “lifts your spirit.”

“Unlike a lot of the music that our generation probably listens to, there’s something very special about symphonies in general, and this orchestra in particular, you can feel the movements in your spirit,” he said. “It’s beautiful. Takes your spirit on a journey.”

With reporting by Stacey Tang, Andy Darin, and NTD.