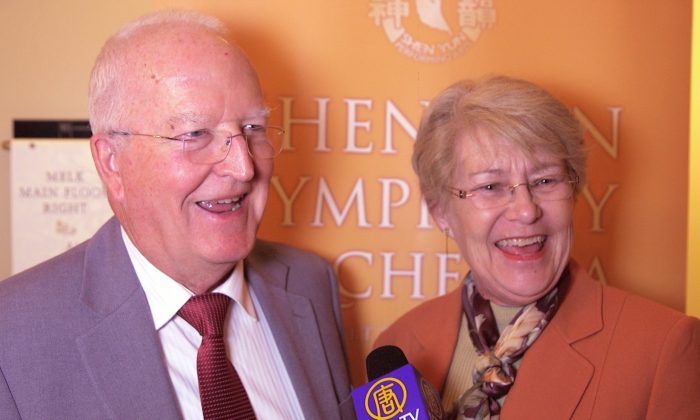 CHICAGO—Traditionally, Chinese music aimed to reveal the emotional state of the musician playing it—even emotions as difficult to visibly express as compassion. This state came through to the Teagues, who attended Shen Yun Symphony Orchestra’s concert at Chicago’s Symphony Center.

“The singers especially brought out the compassion and the various emotions in the music,” said Wells Teague, on Sunday, Oct. 18, at the only performance scheduled in Chicago.

A retired public servant from Austin, Texas, Mr. Teague and his wife, Karon, both with degrees in music, were symphony musicians in their home state.

Getting at this idea of communicating emotion, violin soloist Fiona Zheng, who played Pablo de Sarasate’s “Gypsy Airs” in the concert, shared her perspective on Shen Yun’s website: “The best music, I think, isn’t just about technique and precision; the best music can communicate a performer’s feelings and touch a listener’s heart.”

The emotion both of the Teagues mentioned they specifically felt during the performance was compassion—compassion coming from the music, which is very much at the heart of Shen Yun’s aim.

“One of the pieces expressed the compassion really well. There was also a kind of longing … that you feel through the Chinese music,” Mr. Teague said.

The longing expressed in several of the songs performed is a yearning for a reunion with the divine. The very name “Shen Yun” roughly translates as “the beauty of divine beings dancing.”

Of course, the spiritual heart of ancient Chinese music that the Symphony Orchestra captures is backed by a full Western orchestra, within which arrangement, harmony, and precision are paramount.

It was the Symphony Orchestra’s precision which struck Mr. Teague. He noted that the pentatonic scale, which is used in Chinese music, is challenging but otherwise the requirements of excellence are universal.

Everybody was working together, playing exactly together.
— Wells Teague

“The musicianship is the same, the precision is the same. Everybody was working together, playing exactly together. The intonation and tuning among the different sections was the same. But the scale would be different,” he said.

The effect of the combination of the Chinese unique expressiveness with the Western orchestral arrangements and harmony is what sets Shen Yun apart in the world of music.

As Mrs. Teague said, she felt particularly attracted to the combination of Western and Eastern sounds because, although she’s heard Chinese music before, the Western orchestra blending with it “made it really sweet.”

“You feel in parts very lighthearted and sweet, and being in the fresh air. And then there were the parts where the storms were coming in, and it was wonderful,” she said.

Somehow, Mr. Teague felt his wife had summed up his experience well.

Chinese music is related to the emotions, and I heard that, and I felt natural and I felt at home with it.
— Wells Teague

“The fresh air idea hits very close to home, because of the nature component. Chinese music is related to the emotions, and I heard that, and I felt natural and I felt at home with it,” he said.

The Shen Yun Symphony Orchestra continues its tour with a performance on Oct. 21 at the Symphony Hall in Boston, Oct. 25 at the Kimmel Center in Philadelphia, Oct. 27 at the Woodruff Arts Center in Atlanta, and Oct. 31 at the Veterans Memorial Auditorium in Providence. For information about the orchestra’s October performances, visit ShenYun.com/Symphony