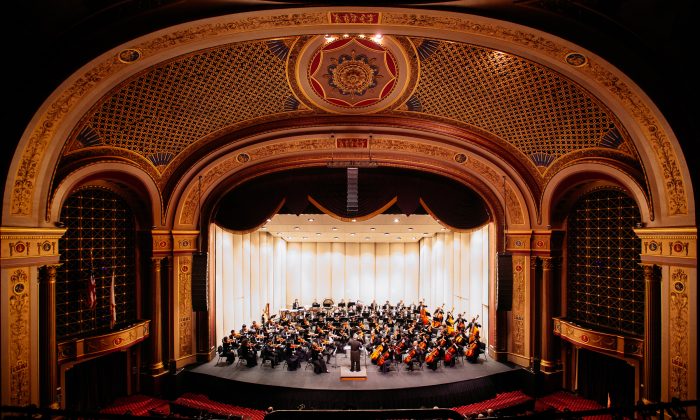 PROVIDENCE, R.I.—Shen Yun Symphony Orchestra’s last performance of the season left audience members at Veterans Memorial Auditorium in Providence in a state of awe. Powerful, inspiring, and breathtaking were the words concertgoers on Oct. 31 used to describe the fleeting experience.

I’m not sure about the meaning, but the feeling to me at the ending piece was just so powerful and the unity of it all was—it just evoked a lot of emotion in me.
— Christie Langslet

“I’m not sure about the meaning, but the feeling to me at the ending piece was just so powerful and the unity of it all was—it just evoked a lot of emotion in me. Powerful,” said Christie Langslet, an occupational therapist, after attending the concert.

The concert ended on an original composition of Shen Yun, “The Power of Compassion.” It begins with a melancholy solo of the Chinese erhu, before the swell of the full symphony orchestra comes in to paint a picture of peace as the story begins.

Danger, terror, hope, compassion, and forgiveness play out in the piece through music with racing strings and dramatic percussion, reaching a majestic end. It tells the tale of the peaceful, spiritual practice Falun Gong, its persecution in China today, and ultimately a future with hope in the ending through compassion.

“It was fantastic, wonderful,” Ms. Langslet said. “They were just gorgeous,” she added of the erhu melodies. The erhu, one of the most important and emotive Chinese instruments, is sometimes called a two-string violin.

Virigina White, who works in hospice, attended the performance with Ms. Langslet and said she had a similar feeling about the music, and at one point in the concert, the violin solo brought her to tears.

“We loved it. I thought it was just such a beautiful melding of Chinese and classical music. It was just amazing,” Ms. White said.

For Ms. Langslet, the vocalists were what she wanted to highlight.

“Incredible, powerhouse voices,” Ms. Langslet said of the vocalists. “Just from the tips of their toes right out. I mean, it was just incredible.”

The ensemble is just one unique feature of Shen Yun Symphony Orchestra. Chinese instruments like the pipa (a plucked lute) are harmonized with a full Western symphony, and the whole orchestra performs original compositions with distinctly Chinese melodies. The bel canto solo vocalists sing original compositions in Chinese. The entire program is curated to share the grand traditions of classical and Chinese music, and Shen Yun’s belief is that these are truly divine gifts. The music, and lyrics of the vocalists, are brimming with philosophical reflection on human life with layers of meaning, according to Shen Yun’s website.

David Liao, an English professor at Brown University, and Nicole Dupuis, a writer and editor, frequently attend symphonies so bought tickets to Shen Yun with anticipation of a blend of East and West, and thought the orchestra just embodied that idea.

Sjoerd Wiersma, who works in renewable energy, had heard about the concert from a friend, and attended not knowing what to expect. He would only be in the United States for five days during this trip, but decided to attend. The experience was unlike any other.

The songs were all new—the program largely consists of original compositions—and there were soloists at every turn. When violin virtuoso Fiona Zheng took the stage with Sarasate’s “Gypsy Airs,” it was just breathtaking, Mr. Wiersma said.

Bob Hubert, a former Navy SEAL, attended the performance with his wife and happily described how much she enjoyed it, pleased that she found the concert as wonderful as he did.

“Superb,” he said. “Everything is excellent.”

“She’s is flabbergasted,” Mr. Hubert said of his wife. “She’s just flabbergasted down there and in awe of what’s going on.”

Deborah Dunning, an environmental entrepreneur and founder and CEO of Sphere E, sang praises of Symphony Orchestra’s unique intensity. The music was different, she explained, because all the instruments had such intensity rather than just one section or the other at any given time the way she is used to hearing orchestras play.

“It was very inspiring,” Ms. Dunning said of the unique blend. “It seems to me it speaks well of the kind of collaboration that’s becoming very important in our world.”