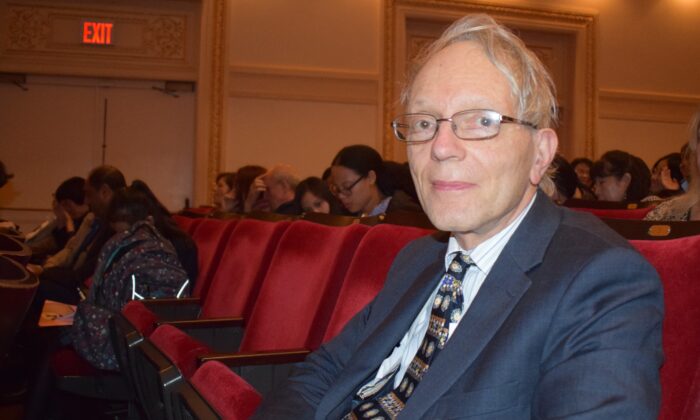 “Very beautiful,” said retired economist Rudolf Hauser at Carnegie Hall on Oct. 12. “I liked the fact that you’ve got newly composed classical music that incorporates traditions of East and West, adding something new to the tradition for a Western audience.”

“It’s a time when so much of the more modern compositions are atonal and the like. It’s nice to see something that—is truly just enjoyable. And in this tradition, there’s classical music from the previous century, at its height. The 18th, 19th, and early centuries. It’s nice to hear new compositions one hasn’t heard before,” Hauser said.

There was a Western classical piece from an opera, and one from a ballet, but the program otherwise largely consisted of original pieces of the length of an overture, with titles like “Mongolian Spirit” and “The Great Emperor Kangxi.”

Shen Yun Performing Arts is a classical Chinese dance company with the mission of reviving 5,000 years of the divinely inspired Chinese civilization, and the orchestra is comprised of musicians from its seven dance companies.  The orchestra pays homage to the grand traditions of both the East and West with its compositions and arrangements.

“There’s a certain quality of, you can almost say, heavenly bliss at times,” Hauser said. “When the strings are playing, it’s a sense of tranquility and beauty, then of course there are the other pieces, which have a rousing contrast, and it’s a glorious sense. A sense of triumph, a triumphant music at times. An interesting combination of the quiet and uplifting.”

For Hauser, the music was clearly classical, but at the same time completely new. The Shen Yun composers had succeeded in adding “something completely original” of their own style to the traditional canon.

Alexander Legault, an economist, attended the performance Saturday evening, and was struck by this newness.

“I thought it was kind of the emergence of a new form, and it was quite special,” he said.

“It’s my first experience [and] I was quite overwhelmed,” Legault said. He said what he heard and felt tonight was unique, and the creation of perhaps something new for classical music.