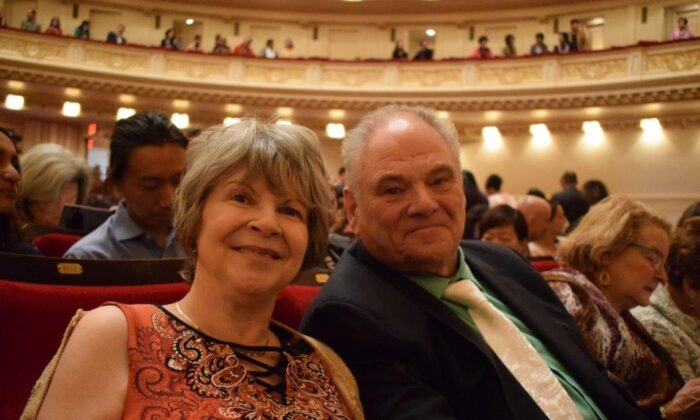 NEW YORK—Yvonne Fernandez, a technical director at Madison Square Garden, had a life-changing experience at Carnegie Hall. She attended a concert of Shen Yun Symphony Orchestra (SYSO), and left with a memory she would keep with her forever.

“It completely made me forget about everything. It heightened my senses. Incredible soul-searching happened,” Fernandez said after the matinee on Oct. 12.

Learning that traditional Chinese culture centered on harmony between heaven and earth, Fernandez said the feeling she had while listening to the music now made sense.

“It brought me back to a certain state and then this incredible height of feeling and expansion, like anything is possible and everything is possible,” she said. “I also felt a lot of hope and desires, anything I wanted to do; this music just had me travel completely.”

SYSO is comprised of musicians from the orchestras of Shen Yun Performing Arts’s touring ensembles, of which there are now seven. Having just finished the Asia leg of the tour, the orchestra is in New York for two concerts.

The orchestra is acclaimed for its unparalleled ability to blend East and West, folding ancient Chinese instruments like the pipa and erhu into a Western symphony, creating Chinese melodies with classical orchestration.

“Just the beauty of it and the magnificence of it, I couldn’t believe I was living this moment listening to this.”

Art can change the course of a person’s life, Fernandez added, thinking back to her own theater experience as a student that led her to where she is today. Now, the SYSO concert had inspired her to work on some of her own writing.

“For me the violins were like voices, and the drama, and all the different instruments that we’re not accustomed to,” she said.

Linda Devlin and Bill O’Keefe have looked forward to this year’s Shen Yun Symphony Orchestra season. They are longtime fans of Shen Yun Performing Arts, having seen the company many times, and have come to the concert performances of SYSO four times.

“It sounds like it comes from heaven,” Devlin said at Carnegie Hall on Oct. 12. “This is our fourth time attending it, we look forward to it every year. It’s just so beautiful.”

“We just kept coming back,” O’Keefe added. He felt a sort of peaceful relaxation being in the audience, and said he often closed his eyes, just so he could experience the music more intensely.

“It sounds like they play from heaven, really,” Devlin said. “It’s amazing every time. They’re just so talented. It’s a peaceful, uplifting place to be, with sounds from heaven.”

“The range of emotions are from love to escape to strength and to submission—it runs the whole gamut of emotions, absolutely,” Devlin said.

This season marks the debut of conductor Dmitry Russu, who was the assistant conductor of the Saint Petersburg Philharmonic Orchestra prior to his new post with Shen Yun.

Maestro Milen Nachev also conducted in the program of original Shen Yun compositions, peppered with classical favorites. Both conductors came back out for encores of original pieces and met with thunderous applause and a cheering standing ovation.

“The string music sounded like heavenly music, and at the end when they picked up the tempo, with the drums in the background, it just seemed like it was composed with God entering the picture,” said Richard Eng, a portfolio manager. “It had me close my eyes and think of heaven.”