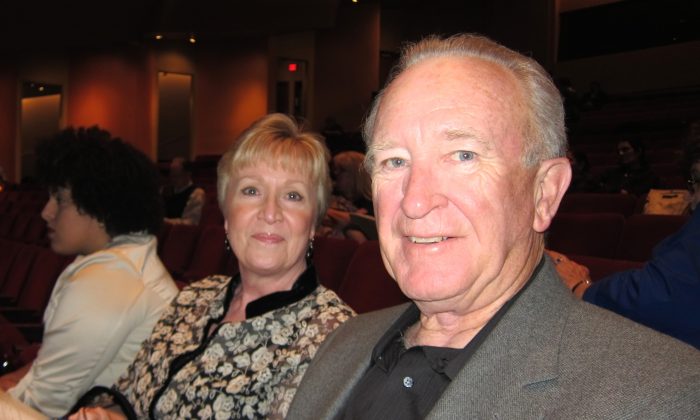 LOUISVILLE, Ky.—Just about everything that Cindy Matherly saw during the performance by Shen Yun Performing Arts taught her something about China. “Most of us don’t know a whole lot about [China], so it is really enjoyable,” she said.

The retired vice president of Finance and Accounting for Kentucky Farm Bureau Insurance saw New York-based Shen Yun, with her husband Steve, the retired owner of The Leasing Group, on March 22, at the Kentucky Center’s Whitney Hall.

Mr. Matherly enjoyed the history presented. “The pageantry and the beliefs of the Chinese, you know, [go] far back, hundreds of years ago. The dragon, for example, it is very ancient,” he said, mentioning the dance Ne Zha Churns the Sea in which a dragon terrorizes a village.

Ms. Matherly thought the production quality was excellent. “The dance is beautiful, and the costumes are gorgeous,” she said.

She noted that the dance was particularly graceful, and seeing it left her with a feeling of joy, “just joy at being able to watch them dance so beautifully.”

Classical Chinese dance, which Shen Yun specializes in, is known for its grace and expressiveness.

A few of the classical Chinese dances tell stories of China today, and of the repression of Falun Gong, a peaceful spiritual practice. Ms. Matherly thought these pieces were included so that people would “know what is going on in China, that their freedom of expression has been so limited, and they have not been able to concentrate on the old cultural ways.”

Ms. Matherly summed up this purpose well. According to Shen Yun’s website, “the Chinese Communist Party has for decades launched various campaigns—most notably the Cultural Revolution—to destroy not only cultural sites, temples, and relics, but also the Chinese people’s belief in virtue and faith in the divine. … Shen Yun seeks to revive these virtues the world over.”

Ms. Matherly noted she learned about the spirituality of traditional Chinese culture and its similarities to other beliefs: “Many of the major religions have so much in common, and I didn’t realize the Buddhists had a perception of heaven, and that we all come from heaven and then we would go back there.”

“That surprised me, so, it’s been very good,” she said.