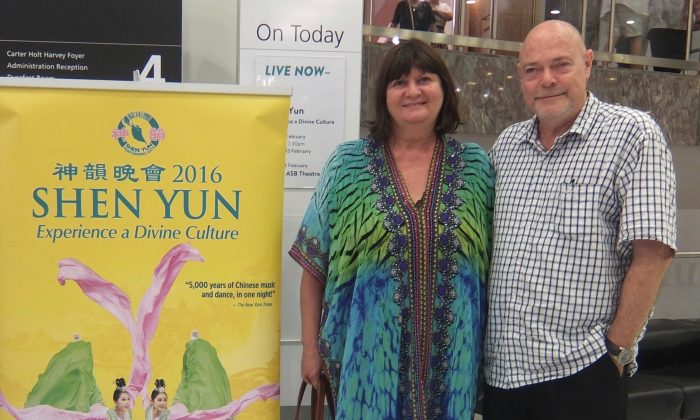 AUCKLAND, New Zealand—The effect of seeing Shen Yun perform often leaves its audience members in awe. And this was the case for gift shop owners Bruce and Marian Reen, who saw the performance in Auckland, New Zealand at the Aotea Centre on Feb. 13.

Through the arts, the New York-based music and dance company aims to revive 5,000 years of a divinely inspired culture.

According to its website, China was once known as the Divine Land and Shen Yun Performing Arts shows its audiences why. A Shen Yun performance takes you back to a time and place that featured heavenly realms and ancient legends. It also tells modern heroic tales—and they’re all told through the universal language of music and dance.

Shen Yun Performing Arts has been wowing audiences all over the world with its revival of the divinely-inspired Chinese culture since 2006—except, oddly enough, in China, where traditional culture has been lost for the last half-century under communist rule.

“It portrays something different [in] each story, it’s all beautiful,” Mrs. Reen said.

Each of the evening’s individual songs or dances highlights some cherished value of traditional Chinese culture—compassion, loyalty, kindness or bravery—often by telling a story.

As the emcees explained, “shen” means divine, and “yun” means the feeling behind the movement. Together, the name Shen Yun translates into something like “the beauty of divine beings dancing.”

Mrs. Reen wants to find out about the traditional culture and beliefs being lost. “I know it happened, but I’d like to know more about it—like research a bit more,” she said.

Whether she knew much about it or not, she knew those past beliefs and values like “the truthfulness, the tolerance” are good.