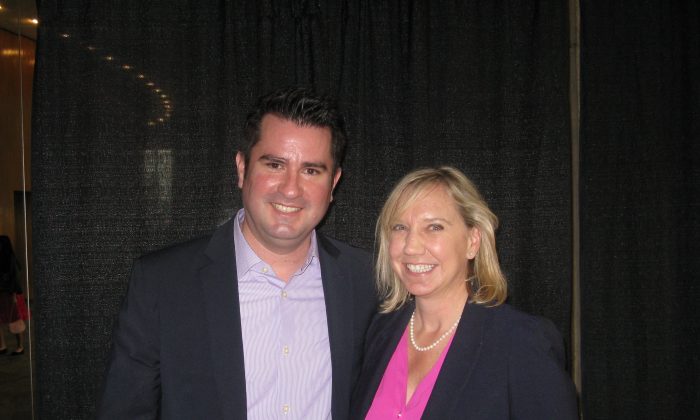 LONG BEACH, Calif.—Meg Rose, a marketing VP in a nearby beach side city, feels that Shen Yun demonstrates what humans “are capable of when we create compassion.”

She was quite moved after watching the first half of Shen Yun Performing Arts World Company with Mauricio Mardones Feb. 7 at Terrace Theater.

“The sense of truth and compassion,” she said, “is global; it’s something that resonates with all of us. That really connected with us.”

She added that the performance is filled with color “and brings out a lot of happiness.”

Shen Yun is a non-profit, New York-based, classical Chinese music and dance company with a mission to revive the beauty and values of traditional Chinese culture, which have been nearly lost over decades of rule by the Chinese Communist Party.

Ms. Rose described the dances as having “impeccable, precise, meticulous choreography—I’m just completely blown away by that.”

But looking deeper into the performance, audience members find a vast sea of Chinese culture.

Shen Yun’s website explains: “Principles such as benevolence and justice, propriety and wisdom, respect for the heavens, and divine retribution, all come to life, washing over the audience. Originating from Confucianism, Buddhism, and Taoism, these ideals are the essence of traditional Chinese culture.”

During the intermission, Ms. Rose was talking to Mr. Mardones about a story-based vignette called The Power of Compassion, which depicts the modern-day persecution in China of Falun Dafa, a meditation practice. In the piece, a violent police officer changes his ways after he hurts himself and receives help from the very people he was persecuting.

That piece “particularly strikes a chord,” she said. “I feel like the world needs to be more open and available.”

She said the piece demonstrates how anger can be tempered when others reach out with kindness—it shows “what’s possible when humans are good.”

Brett Chandler, president and general manager of an agricultural cooperative in Ventura County, drove two hours with his family to see Shen Yun on Feb. 7.

He said that tickets were sold out for the Thousand Oaks performances earlier in the week. “We wanted our whole family to be here, so we managed to get tickets” for Long Beach, he said.

Mr. Chandler was impressed by the expression of the dancers.

Mr. Chandler was describing what Chinese dance refers to as yun, or bearing. “Bearing emphasizes internal spirit, breath, intent, personal aura, and deep emotional expression. In essence, the spirit leads form, so that form is imbued with spirit,” according to Shen Yun’s website.