Shen Yun Storytelling ‘Really Gets Into the Soul’ 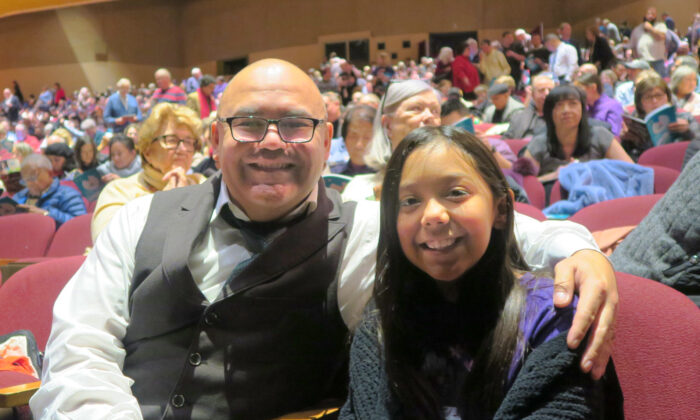 SAN JOSE, Calif.—Photographer Daniel Hernandez and his 10-year-old daughter, Abby, enjoyed Shen Yun together at the San Jose Center for the Performing Arts on Dec. 29, 2019.

“It was awesome,” Hernandez said. “You feel so energized, and you see it—the energy, the dancing, and the storytelling.”

Abby told her father she wanted to see Shen Yun, so he said, “Let’s go.”

Many Shen Yun dance pieces tell stories from ancient and modern China. One story that stood out for Hernandez was “Abetting the Wicked,” a tale about two brothers who experience persecution that is happening in present-day China.

“You get kind of choked up about it; it really gets into the soul,” he said. “It was really powerful, and the way [one of the brothers] felt bad about what had happened, it really struck him—it was really neat the way they did that. It was really nice.”

He admired the way the dance pieces are put together with the music and the animated backdrop.

He also appreciated the brilliant colors of the dancers’ costumes.

“All the colors come together beautifully,” he said.

Shen Yun’s website states: “Shen Yun’s dance costumes and colors are true to traditional aesthetics and styles. Their vibrant hues and exquisite detail breathe fresh life into every dance piece and story, painting the present with the splendor of the past.”

Hernandez admired the beauty of dance pieces like “Lantern Grace,” in which female dancers glide across the stage with bronze lanterns; and “Water Sleeves,” in which the ladies wear long silken sleeves that flow and trail behind their arms.

Abby, who plays the violin, especially enjoyed the live orchestra.

“The orchestra is playing very beautiful music,” she said. “It brings a whole lot of emotions into the story, it brings it all together. … I’m really interested in the orchestras and all the string instruments.”

She felt inspired by the performance and wished to be like the Shen Yun artists.

“It would take a lot of practice to be able to be like them, and I hope that one day I could be like them and I can do a performance too,” she said.

“Everybody has got to see it,” her father said. “Especially if you love music, dancing, performance. It’s awesome altogether.”

With reporting by Michelle Yang and Sally Appert.