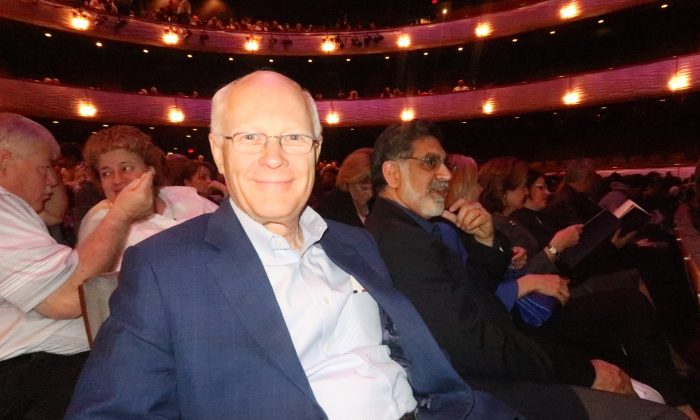 “The dancing is remarkable. Every way I think it’s fabulous,” he said.

Best said the performance gave him an uplifting feeling.

“I feel good, feel light, happy and inspired,” he said.

Bryan Vogel, Vice-President of Herman Integration Services, an audio-visual company, marveled at how the performance came together.

“The production and the colors are awesome,” Vogel said. “I really liked the way everything flows, everybody’s synchronicity, and the orchestra is very good.”

Shen Yun Performing Arts’ mission is to revive 5,000 years of traditional Chinese culture through music and dance. Six tour companies are currently traveling through multiple continents on its 2019 world tour.

Harbaugh said she had been waiting to see Shen Yun for years and the performance did not disappoint.

Watching Shen Yun’s depiction of China’s far-reaching culture and history made Harbaugh realize that the recent rule of China by the Chinese Communist Party only occupies a small part within China’s overall history.

China’s traditional culture is deeply connected with belief in the divine. Values and virtues stemming from this belief also manifests in traditional Chinese art forms including classical Chinese dance and music. Lyn, who has trained in ballet and other forms of dance, said she saw the spiritual side come through in the performance.

“I just loved how they had … the heavenly angelic beings coming down and bringing healing,” Lyn said referring to a particular story depicting the persecution of a Falun Gong practitioner in China.

“It brought a lot of hope for my heart.”

The theme of hope also resonated with Harbaugh, who said the stories presented by Shen Yun called out to something deep within people.

“When people are allowed to be who they’re really created to be, there’s really a lot of beauty and freedom there,” she said.

“All of us maybe had a dark era. Maybe people stick us in that box and that’s what people remember us for, but that is not our true history, our true self.”

“So when we allow it to shine, it’s very beautiful and colorful.”

With reporting by Diane Gao, Amy Hu, and Cathy He.