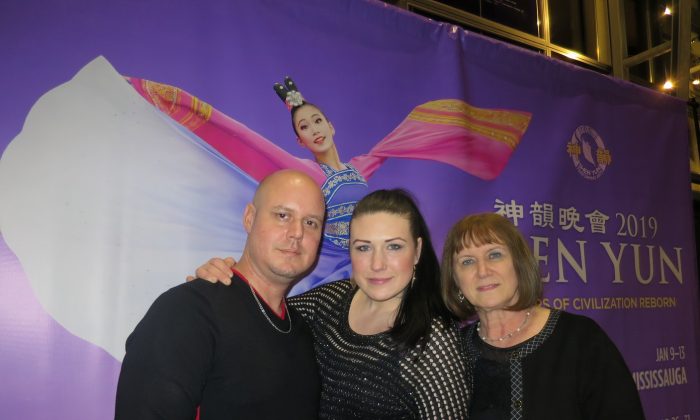 MISSISSAUGA, CANADA—Mira Lewandowski said she was deeply inspired by the values she saw in Shen Yun Performing Arts. Her youngest daughter was killed last year and seeing the presence of the divine portrayed on stage was particularly meaningful.

“[The values Shen Yun portrays are] to have faith and know that there is something more than just our mere existence. That there’s something beyond that’s stronger, that has influence—something that empowers us,” she said.

Mrs. Lewandowski, who works as a senior policy consultant for a multinational insurance company, was accompanied by her eldest daughter Natalie on Jan. 10 at Mississauga’s Living Arts Centre. Natalie was also touched by the divine aspect of the performance.

“It was actually quite healing,” she said. One scene that stood out in her mind was from in the piece “Goodness in the Face of Evil.” In the dance, a young woman is persecuted by the Chinese police for practicing the meditation discipline Falun Dafa. She loses her sight, but in the end Buddha sees her faith and miraculously restores her vision.

“It’s so similar to how Jesus healed the blind. It was actually really beautiful to see the similarities,” she said.

She said that spirituality is very important for humanity, especially in today’s materialistic world. Having lost her daughter last year, she sincerely hoped people could be good to one other, forgive, and understand one another.

“This was an inspiring show from that perspective,” she said. The fact that the Chinese maintained their faith in the divine throughout their history, over 5,000 years, was particularly touching.

Natalie was moved by this aspect as well. “I saw the similarities across the cultures —how to look towards a divine being, that there is something more than us, something that you can look towards for healing, for comfort—to see that it brings togetherness.”

Accompanying the two ladies was Natalie’s partner Andrew Crawford who was also impressed by Shen Yun’s ability to transcend the ordinary through dance.

“There was a message of even in hard times, there’s powers bigger than us, and they’re capable of wonderful things. Through dance tonight, we were shown that some of these miracles can take place,” he said. “As a whole, everybody was fighting for good in this show,” he said.

Every Shen Yun performance is comprised of around 20 vignettes of classical Chinese dance, story-based dances, and ethnic and folk dances from China’s many ethnic minorities and regions.

“There’s a spiritual element to the dance. There’s no words being used, but the mind, the mental pictures that you get from this dance are amazing. I never ever thought I would get as much as I did from dance,” he said.

Natalie believes this spirituality also explains the beauty of the performance.

“There is something behind all that to allow people to have such talent—to actually be able to perform something like this, to create something so beautiful. It’s very inspiring, so obviously there is something divine behind that,” she said.

With reporting by Weiya Wang and Madalina Hubert.