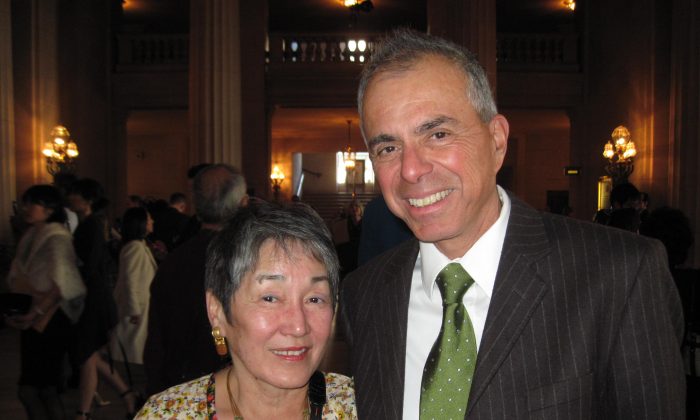 Mr. Soto is the author of eleven poetry collections, including New and Selected Poems, which was a finalist for the National Book Award and the Los Angeles Times Book Award in 1995. He attended Shen Yun at the War Memorial Opera House on Jan. 4 and said the Shen Yun performers were “very spectacular dancers.”

Based in New York, Shen Yun Performing Arts has toured the world for eight years with the mission to revive 5,000 years of traditional Chinese culture through dance and music.

Mr. Soto said what impressed him the most was the colorful handmade costumes of the dancers.

“They are really stupendous to look at, especially the combination of the colors,” he said. “We have a lot of costume books at home, and so that interests us.”

“We knew it was going to be very grand,” Mr. Soto said. “It was going to be a spectacular performance. But we didn’t know that there would be little storylines, so that makes it very nice.”

Many of the dances in Shen Yun tell stories and legends of both ancient and modern China. As Shen Yun’s website states, “A Shen Yun performance features the world’s foremost classically trained dancers, a unique orchestra blending East and West, and dazzling animated backdrops—together creating one spectacular performance.”

“We were enjoying it very much,” Mr. Soto said. “I like, of course, the blend of Western instruments and Eastern instruments.” He was also pleased with the animated backdrop, saying, “It always surprises me. I love that.”

Classical Chinese dance features many difficult techniques and movements, such as leaps, flips, spins, and tumbles, which impressed Mr. and Mrs. Soto.

“Some of the leaps are spectacular,” said his wife.

Mr. Soto said most of their friends would also enjoy the performance very much.

“I am going to encourage them to come,” he said.