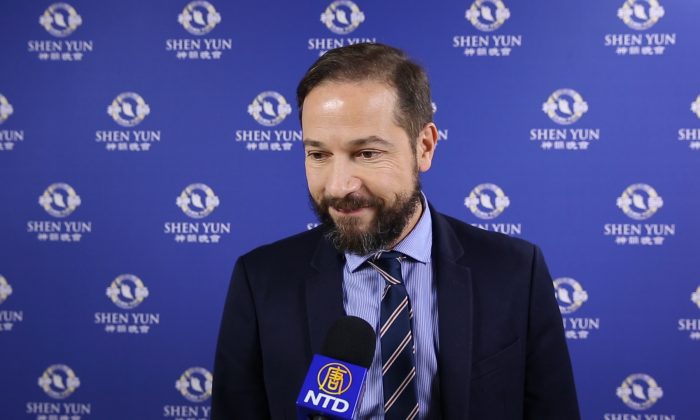 PARIS—From the moment Shen Yun Performing Arts began, all the way to the end, there wasn’t a single moment, a single second, that wasn’t both beautiful and captivating, according to Pierre-Alexis St-Michel, a partner at a consulting firm.

“The show was really beautiful. The costumes are stunning and the dancers are fantastic. It’s very poetic,” he said.

St-Michel saw the performance with his family on Jan. 20 at the Palais des Congrès, as it is an annual family tradition to attend a beautiful dance performance.

“Because we believe that dance, and actually as it was said in the show, soothes the body, calms the soul. Shen Yun fulfills this aspect perfectly,” St-Michel said.

As the emcees also explained, the name “Shen Yun” translates into something like “the beauty of divine beings dancing.  It is the New York-based company’s mission to revive the traditional Chinese culture of 5,000 years, one which is said to be divinely inspired.

That aspect was clear in the performance as well, according to St-Michel.

“It is very obvious,” he said of the spirituality of the authentic traditional Chinese culture. “We cannot be unaffected by the spiritual side of this show.”

“It is a very beautiful image that is actually sent from China: its traditions, its stories. We have a vision of China that is a very modern vision, but it is also because we are very, very far from it,” St-Michel said. He said it was great that Shen Yun could convey through art this once-lost culture, and “to bring back to life great moments of traditions.”

For the family, it was a beautiful discovery.

“I am a great lover of classical dance, I did not know classical Chinese dance and I’ve discovered it today,” he said. “I’m really happy, I thought it was really beautiful, very graceful. We have a new culture that we have discovered today as a family.”

After seeing the performance, he said they would be leaving inspired.

“We had a wonderful time,” he said. “Our head is full of beautiful images, and a lot of colors.”